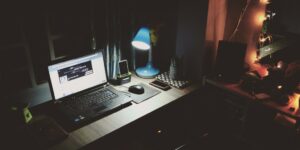 Nowadays we can find both defenders and detractors on the ever-continuing discussion about the true potential laptops can offer to users. Whereas it’s true that we cannot put the same expectations on portable devices as with desktop solutions, laptops have reached an evolution stage in which they can pair with their desktop-intended counterparts, delivering reliable performance without compromising the portable factor. But truly, where does the problem show up?

For some users, the sole idea to be carrying around a 10+ lbs laptop, plus its battery charger and a much bulky backpack seems entirely unappealing as they wish to keep working on the go; however, certain careers demand a good deal of specs as high-powered graphics cards, top-notch displays, more than average amount of RAM, powerful processors and the list goes by.

If, in order to get such performance, we ought to sacrifice portability, then the whole portable premise of laptops becomes nothing more than a contemporary intended fallacy, as in fact we need to be working in a quite comfortable – not to mention safe – place due to the bulky appearance of the gear we are carrying around. This is where innovation takes its higher stakes to satisfy users all over the world.

As we stated above, users that thrive on high-powered laptops are often faced with the lack of portable solutions for performing their work. According to Reviewsxp Ranking of Laptops for this upcoming year, the most powerful builds we can find are packed with last-gen Intel i7 series processors and NVIDIA GTX 1060 or higher dedicated graphics cards, but instead of settling for the bulky solution, do take a look around to what market has to offer.

Just like with common laptops, slim solutions are also starting to pop-up for gaming laptops. Remarkable models such as the Asus Zephyrus GX501VS can weigh just 5 lbs while being paired with Intel i7 7th gen processors and NVIDIA GTX 1070 graphics, all of this with the standard of 16 GB of RAM upgradable to a max of 24 GB of RAM. Not just professional gamers can feel pleased about such lightweight option for the kind of device they are looking for but also professionals in the graphics industry as video editors, ArchViz professionals and designers alike whose demand for high-end software can be met as well.

Asus isn’t the only vendor who decided to explore this market as we can find amazing solutions coming from MSI, DELL – for their Alienware line – and Gigabyte. MacBook laptop line is also an alternative – and indeed a powerful one – in case you decide to switch your OS as well; just remember to give yourself time to learn how OSX works, and review some software compatibility issues before making your choice.

Is there a downside for these innovative laptops? Let’s discuss it next!

The Price of Comfort

While it may seem absolutely amazing to be working with a lightweight solution for a powerful laptop, there’s a reasoning behind why do we still see such bulky high-end laptops available in the market to date.

First of all, it’s all a matter of the size of the components themselves. Despite our best efforts to find portable gear, most hardware pieces cannot be reduced up to these days as technology hasn’t explored those areas yet. RAM stick modules have a fixed size, so does the processor, hard drive units, and both graphics and processor.

Some units may ditch the not-so-needed optical drive and stick with M.2 SSD drives to save space, but that also increases costs as these technologies are still considered a luxury in most markets.

Another thing to consider, linked to the sleek profile design of these laptops, is that RAM expansion capabilities are often clipped. For these laptops getting more than 32 GB of RAM may seem impossible as there isn’t enough space to hold many RAM sticks – a considerable contrast to high-end Asus ROG laptops that can bear up to 64 GB of RAM. Insane I know, but there might be people around there that consider a necessity to work with such amount of RAM.

Finally, these laptops have considerable issues in what respects to thermal management. As they are quite thin, vents used in these models are reduced in size – which in some cases can translate in a reduced airflow for the device, thus leading to overheating when working with high-demand software. It becomes crucial to get a hold of some thermal dissipater for those hot summer days but also to be methodical when performing internal laptop cleaning – that’s the best way to keep your device’s life expectancy within the desired range.

How To Make Your Start-Up Office Stylish