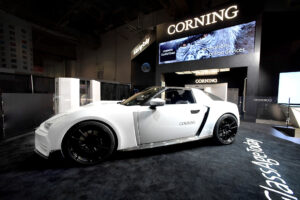 There were so many future cars showcased at CES this year I’m kind of wondering if the next car show will be showing consumer electronics to fight back. There were a ton of amazing cars including one purple 3D printed beauty that had me almost drooling. But one of the most interesting was Corning’s glass car showcase largely because it anticipated a near term future where more car makers followed Tesla’s lead and replaced much of their dash with displays. Sadly, they didn’t let me actually drive the car but, for a company that doesn’t make cars, their showcase car was impressively attractive and, I’m told, also impressively fast (it was electric).

Let’s talk about some of the highlights.

This never really occurred to me but while they played down the use of a display for a license plate I thought it had merit. It would be far easier to see at night, it could instantly reflect license renewal or expiration (and it would be really hard to steal the related sticker), and the display could alert out if the car was stolen or the driver was in distress. Oh, and in our self-driving car future, it could alert out that the human was driving the car so the other cars could keep their distance

The most impressive use of Gorilla Glass was in the windshield. This not only made the windshield significantly lighter, sturdier, far more transparent, and far easier to defrost it also potentially gave it a super power. Apparently because it is thin Gorilla Glass windshields are far better for heads up displays and video. The end result is you could mount an FLIR infrared camera on your car (which I’ve done) and project the image on the windshield allowing you to more effectively see through storms while keeping your eyes on the windshield (and not on the little display on your radio which is what I have to do now.

At some point you could put the mirrors and backup camera on your windshield as well and, if you had a self-driving car, you could put movie on it. Granted you might want to add a smart glass component to this solution so you could darken the car first.

If you are like me you’ve had a sunroof jam problem which is really annoying particularly if it has just started raining and, while glass roofs are cool, the sun can glair out the displays in the car. Corning put smart glass in the roof so that, with a touch of a button, you could darken the roof and block out the light without moving parts or the risk of breakage and no chance of getting wet.

I should point out that Panasonic was also using smart glass creatively. In their case they would electronically frost the glass and then project something on it placing it at the front of a display. Then when they electronically unfrosted the glass you could see what they wanted to sell you. This means you could switch from showing an ad for something and the actual thing you were selling. It was a ton of fun to watch.

Wrapping Up: The Glass Car

Given how many windshields I go through I was personally most excited about the fact they announced that they had partners to help create and sell replacement windshields made of Gorilla Glass. But I’d love to have displays used much more broadly in my cars like Tesla does today and I’m particularly looking forward to when I can put the projection from my FLR Infra-red camera on my windshield. That is all coming pretty fast and the Corning Glass Showcase Car is an indicator that this could change far more quickly than we think. But, seriously, they had me at the part where the windshield would resist chipping and cracking because every time I replace one there is the risk the installer will really screw up the car and I’d like that experience to end. Soon…

5 Secrets To Helping An Alcoholic Family Member Or Friend