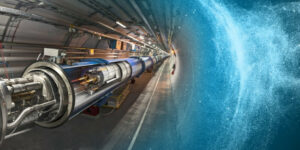 Combining data from NASA’s Chandra X-ray Observatory and India’s GMRT, researchers have discovered a “Cosmic Double-Whammy” as they put it.

The collision of two galaxy clusters, Abell 3411 and Abell 3412, combined with the eruption of a nearby supermassive black hole, has created a unique phenomenon similar to a particle accelerator.

The spinning black hole is producing a rotating magnetic funnel, the resulting, powerful electromagnetic field is accelerating in-flowing gases away from the black hole. Then, this accelerated particle jet is getting accelerated again, after encountering the shock waves from the galaxy cluster’s collision.

This is apparently what happens when two of the universe’s most powerful phenomena come togehter, you get an enormous particle accelator.

Felipe Andrade-Santos, involved researcher
It’s almost like launching a rocket into low-Earth orbit and then getting shot out of the Solar System by a second rocket blast

The discovery of this phenomena was only possible through combining the images of different telescopes.

Below is the view in different wavelengths -courtesy NASA