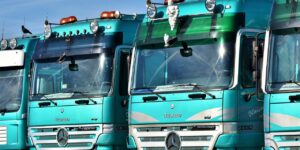 After designing Google’s first self-driving car, ex-Google engineer Anthony Levandowski has set his sights on another goal: designing self-driving trucks to allow drivers to rest on long stretches of highway.

His new San Francisco-based startup, Otto, currently employs approximately 40 people, some of whom come from top companies in the industry, including Apple and Tesla. While Otto’s competitors are building new vehicles to achieve their goal, Otto is focused on creating a self-driving kit, which could be installed on the estimated 4.3 million existing trucks already on the road today to convert them into self-driving vehicles.

This would not only reduce the amount of resource waste by avoiding the need to retire old trucks in favor of new ones, but it would also reduce the cost for companies who choose to use self-driving trucks, costing only a fraction of the $100,000-$300,000 price of a brand-new cab. Otto has already installed this kit on three Volvo cabs and successfully driven them along several miles of Nevada’s highways, even without a safety driver in the vehicle.

While the self-driving kits would allow drivers to rest only during long stretches of highway driving, it would reduce the number of hours drivers would need to be awake, alert, and focused on the road. Due to federal regulations, a truck driver can only drive 11 hours per day because the accident rate skyrockets after 10 hours of constant driving. Otto may be creating a way for trucks to travel 24/7, which would increase companies’ revenue stream due to the boost in efficiency, while also adhering to federal regulations and giving drivers needed breaks for rest.

Of course, this breakthrough in technology will require new regulations regarding self-driving vehicles. While there are currently some state-specific regulations, Otto co-founder and ex-product lead for Google Maps and Google’s Motorola smartphones, Lior Ron, stated in an interview with Backchannel that the Department of Transportation is getting involved to bring about the necessary regulations to ensure the safety of all involved and the public at large across the country. Self-driving truck accidents are a huge consideration, especially given recent news related to self-driving car accidents.

One thing is for sure: as this new technology enters the mainstream of how we live and do business, the shift will necessitate rapid shifts in many other industries like the field of insurance. In the meantime, onlookers of this emerging change can sit back and enjoy the ride.