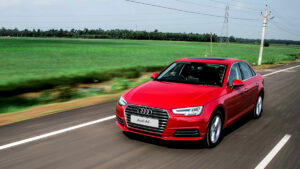 The new Audi A4 on the block isn’t just a new generation of
an old model-line — it’s an evolution that has adapted itself to suit the
lifestyles of a new generation of customers. This is a car that is going to force its rivals to play catch-up.

The most obvious first impression for any physical object
originates from its aesthetics — even more so for a car. The A4 used to be a rather
subtle looking car.

Then the German manufacturer underwent a design reinvention of sorts and found a language that would catapult generally
boring designs to stuff of legend. With the B9 model (new generation), the A4 has now transformed into a
classy, mean looking machine thanks to a whole bunch of design talent spent mostly on the front and the rear.

The silhouette remains largely unchanged despite the B9 being a tad longer than the outgoing B8 A4. This is a good thing — it instantly establishes a link with the line-up while the five-spoke alloys look progressive and cool.

The
flow of the design from bonnet to boot was rather sorted and we’re quite glad they haven’t messed around much with it, after
all, why fix it if ain’t broke, right? The biggest visual change you’ll notice on the new A4 is actually on the front — that
part of any car which can make or break a deal for any customer.

This isn’t just about design anymore because there’s a whole lot of technology packed in as well. Step inside and you’re greeted by a mix of a retro and an ultra-modern cabin. Those air-con slats running across the width of
the dashboard reminds us of the 80s and that’s a great thing.

If that wasn’t enough, there’s always the horizontal real wood
inserts and with the way the controls are laid out, it takes you back in time to an era of floating dashboards.

Let’s focus on the prime mover — the 30 TFSI is in fact powered by a 1.4-litre, forced induction, inline 4-cyl, petrol engine.
If you’re thinking that the A4 is then going to be underpowered, you couldn’t be more wrong.

The 1.4-litre petrol engine on the Audi A4. (Photo Courtesy: Motorscribes)

More importantly, thanks to the reduced kerb weight, the car pulls neatly away as you floor the throttle, working
well through the 7-speed dual-clutch transmission.

The engine may seem a tad noisy — but you get used to it fairly quick. There’s also what everyone likes to call the yacht-style gear selector — a big chunky lever that your
hands grip naturally and comfortably to slot the car into either Neutral or Drive, etc.

The 1945-kg weight also helps to achieve some decent fuel efficiency — all of 17.84 kmpl according to the ARAI.

The 21-cm monitor perched on top of the
dashboard has a lot of information to share, but isn’t intrusive to the view out the front windscreen in any way — something that
we appreciate a lot considering most such monitors tend to block a lot of your view directly or cause a distraction to your line of
sight.

The front bucket seats obviously get all-electric adjustment and it is programmable through the key fob too. Between those seats is
an adjustable arm rest covering what Audi likes to call a phone box.

The interiors of the new Audi A4. (Photo Courtesy: Motorscribes)

The big highlight here though, is an elevated pad textured in skid proof
rubber — this is the wireless charging pad within the A4 and as long as you have a phone with that capability, this is quite the
feature to have — no more pesky wires to charge your smartphones!

Move over to the rear bench and here’s where the paradox set in for me. This isn’t about the space — there’s tons of that in here,
especially when it comes to leg room. It is about the reality of buyers of this segment of cars — most of these are driven by chauffeurs with the owners being ferried
around in the back.

While the bench itself is comfortable, there’s absolutely no control for the rear seat passengers when it comes to
essential ‘back-seat’ things, such as the entertainment system. Considering that owners will be occupying this space it would have been
great to see some of the controls given to them as well.

Functional instrument cluster on the Audi A4. (Photo Courtesy: Motorscribes)

The ride is firm enough even in comfort mode to be able to push through the corners and carry decent speeds, and yet it soaks up the potholes
quite neatly.

On the drive with the Audi A4. (Photo Courtesy: Motorscribes)

The route took us over completely unpaved, makeshift service lanes over railway crossings as well and the A4 behaved like a well-mannered
child out for dinner with its parents at a family friend’s house — no squeaks, no complaints and eating up whatever and how much you put on its plate.

Audi has its customer base sorted and the A4 has just expanded that to reach out to newer ones. This is a car that is just as fine as any of its competition,
if not more, the Jaguar XE included, but it looks like it will have big appeal when it comes to the smartphone generation as well.

The rear side of Audi A4. (Photo Courtesy: Motorscribes)

This is a generation that
may not necessarily be at the age of buying their own luxury car, but influence buying decisions in a big manner and when they see the
technology in their devices being actively reflected in the car their parents are considering, take a wild guess which way they’re going to be swinging.

An Introduction to Cisco Spark Board

Benefits of Online Learning Courses to Change Your Career