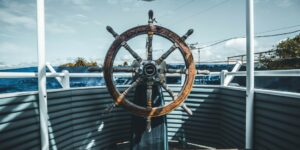 This week I’m looking at CTO and Executive Vice President Mark Papermaster’s tenure at AMD, and it reminded me of a story I was told when I was on a Windjammer Cruise a few years ago. The Captain and ship are no longer with us having perished in a nasty storm, but the story he told stuck with me, and it parallels the most important decision that Papermaster made as CTO of AMD.

Let’s talk about the true story of how to not sink a cruise ship and how it relates to effective executive decision-making this week.

A few decades ago, I was invited to sail on the Windjammer Ship Fantome, which was an old, converted sailing warship. It was the Duke of Westminster’s personal yacht. It had been heavily armored but no longer had weapons on board.  The front of the ship had a bowsprit of solid steel about as thick as a human torso.  The captain, Guyan March, had been a captain with Norwegian Cruise lines and, as he told the story, was moored right next to a huge Norwegian cruise ship when he decided to show off.

His plan was to use the foresails to pull the ship off the dock, raise the mains, and spectacularly and safely come about (turn the ship around) and give the folks on the cruise ship a show.  So, he called for the mainsails and foresails to be unfurled and quickly realized he had a problem.  The third mate, who was supposed to be handling the foresails, was instead chatting up a young woman on deck which meant the ship wasn’t coming about but was building up speed and aimed right at the middle of the cruise ship. The cruise ship had a steel hull made up of ¼” metal plate while the Fantom, being a warship, not only had the huge solid steel bowsprit but was also clad in ½” military-grade steel.  If it hit the cruise ship at speed, it would likely cut the cruise ship in half, sinking both ships.

Guyan ordered the Fantom’s huge engines fired up, and then he had a choice to make.  If he ordered a full reverse, he knew he couldn’t stop the ship, only slow it with the best outcome being a hole in the side of the Norwegian ship about the size of a house.  Or he could order full ahead and hope he got enough force on the rudder to miss the ship entirely.  Granted, if he didn’t turn the ship, he’d take out both the cruise ship and the dock where it was moored.

He ordered full ahead and was able to turn the ship enough so that it made a glancing hit, snapping one of the massive oak booms and removing much of the paint on the sides of both ships, but both ships were still seaworthy, and his gamble paid off. The decision took a ton of guts because, if it didn’t work out, he was done as a captain and might even have ended up in jail.

Executives often make bet-your-career decisions like this, but few have the guts to do so.  Which causes folks like Papermaster to stand out.

When Mark Papermaster joined AMD, it was in deep trouble, and Papermaster, because he’d recently been fired from Apple, should have been risk-averse. His firing from Apple was tied to the Antenna Gate scandal at Apple, which arguably wasn’t his fault, but because Jobs hated IBM employees and Papermaster was ex-IBM, it looked like Mark was scapegoated.  Ironically, IBM was the company that helped Apple fix the problem, which has always seemed odd to me given how much Jobs seemed to hate the company and its employees. It kind of surprises me how many firms have helped Apple over the years, even when they have been treated horribly by the company.

So Papermaster joined AMD under a bit of a cloud which should have made him risk-averse. But he was faced with a hard decision. He could take the easy path by trying to work with AMD’s then Bulldozer technology, which wasn’t competitive and try to make it more competitive, which would have failed but would not leave him at personal risk. Or he could push to have the technology redesigned and leapfrog ahead to create something that was competitive and would take the battle to Intel. But, if that failed, his career likely would have been over and AMD would have gone under.

Like Captain March, he made the hard choice, putting his own neck on the line, and the result, like March’s, was that AMD is now in far better shape than it has been for decades and far more competitive than most that follow the company thought possible.

Wrapping up:  Making the hard choice

The higher up in a company you go, the more likelihood you’ll have to make a high-risk decision. Most of the executives I’ve studied tend to take the safe path. I remember meeting with one senior VP at IBM years ago to whom I presented a series of critical problems that were killing the company, only to have the exec say he was aware of the problems but, if he tried to fix them and failed, he’d get fired and lose his pension. IBM almost went under due to people like that who felt it far safer to cover up problems than fix them.

Papermaster and Captain March were cut from better cloth, and both showcased a willingness to put their own careers at risk to save their operations. Part of an executive’s job is to take risks, but executives that are risk-averse tend to be company-killers as much as those that take unreasonable risks. Knowing the difference and taking risks when appropriate is what often differentiates the truly successful executive, the one who is an asset to their company, from the dead weight.

Something to think about when you look at the behavior of your own upline.