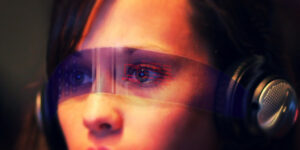 Rumor has it that Apple is partnering with the German lens Manufacturer, Zeiss, to make their own version of an augmented reality wearable, similar in concept to Microsoft’s HoloLens.

Apple has been suspected of working on a reality/ virtual reality mix wearable ever since they filed a patent for a “transparent electronic device”. But Robert Scoble revived the whole debate, with his Facebook post

[AR] gives the capability for both of us to sit and be very present, talking to each other, but also have other things — visually — for both of us to see,
AR can be really great, and we have been and continue to invest a lot in this

Virtual reality sort of encloses and immerses the person into an experience that can be really cool, but probably has a lower commercial interest over time,

It was no surprise that internet Sherlocks started putting the pieces together, and nearly unanimously came to the conclusion that, Apple’s (now) highly anticipated augmented-reality-capable eyewear could become reality this year.

I am sure lots of people are looking forward to Apple’s first wearable, but I think it is a little too soon to set up the tents in front of the nearest Apple Store, in anticipation of the iWear 1.0.

How to Care for Hair Extensions?