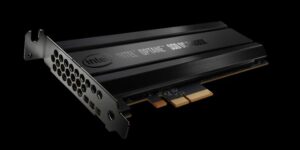 Intel and Micron, 18 months ago, announced the launch of the 3DXPoint: the Optane SSD Card. Though information about the card was limited, Intel impressively hailed it on the grounds of reliability, high performance, and power consumption.

As to whether the card is reliable and robust or not, the time has come for us to know the truth. The Optane SSD, DC P4800X was launched on the 20th of March. Can you guess its size? A whooping capacity of 375GB with latency lower than that of NAND.

Check out the specs

Previously, storage of data was purely “in-cached” through memory or on hard drives. The latency of hard drives, however, posed a problem, with latency measurements happening in milliseconds and order magnitudes greater than DRAM, which evidently is worse in comparison to CPU cache. Though hard drives have higher latency than NAND, the gap between them is still wide.

The future of SSD memory Card

With the launch of this memory, Intel is surely adding a lot to the SSD card market. Right from obvious specs like storage to big ones like improved performance, the optane card, even if it doesn’t become a game changer, will add a lot to memory and storage in our devices.

Intel’s SSD card is going to be used as a cache and fast storage drive. Its principal work is to ensure a high performance in memory, as well as help buffer NAMB.

This new SSD is to be used as a device for memory deployment, extension, and replacement. While we might consider it counterintuitive to using NAND, which is known to have low performance compared to DRAM, the workload seem not to depend much on access speed – the ability to contain a lot of information in memory whiles using less power is seen as a more vital feature than just bandwidth.

Common Android Phone Issues and How to Fix Them

Android overtaking windows as the most used operating system in the world?