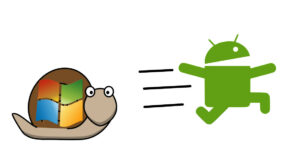 After spending over 8 years with us, will android overtake windows and become the most used operating system? Well, if the statistics provided by StatCounter, the renowned web analytics agency, are to hold for the coming years, then windows and android could trade positions.

From the auspices of StatCounter, 38.6% of the web traffic worldwide belongs to Windows. Android is tagging along with 37.4% of all online activities. How is that possible? Bill Gates didn’t know that his “genius” operating system will get heated competition this much. But that shows the dynamism and competitiveness of the tech world. Just in 2012, Windows held 83% of global web traffic. At that time, android only had 2.2% of Web Traffic.

Whiles these two operating systems are literally battling for the best and most used one, macOS is still behind Android, and doesn’t seem to catch on any moment.

What is the cause?

Though these statistics do not draw a distinction between types of devices (phones, 2-in-1s, tablets, etc.), there’s a strong force that tells the tech world why this trend is happening.

The world population is purchasing more phones than computers/PCs. The rate of phone and other portable device acquisition far outweighs that of PCs. With android being the most widely used mobile-based operating system, it is natural that its market share of the global web analytics increases.

The browser market is included

Android is not just taking over the operating system market. The browser market is also shifting slowly to Chrome. It seems Google is on a route to outcompeting Microsoft in some key areas. Chrome’s usage has been on the increase for some years now. Google, since 2016, is purported to have taken over 300 million customers from Microsoft.

Well, the battle doesn’t seem to abate any time soon. Since technological inventions would not stop, let’s see what the future holds for us.

But do you think android will really take over everything? Including phones, desktop, laptops, tablets etc.? And would Microsoft prepare a comeback?

Intel’s first Optane SSD Card Launched: something for the future of SSD Cards