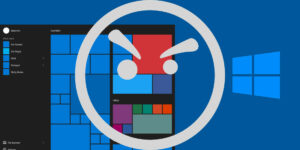 Windows 10 has been released for more than a year and now it’s becoming the most popular version of Microsoft’s Windows. Despite the fact that many users are hesitating about upgrading to Windows 10, it’s still the perfect version of Windows for most of us.

Alongside the good features and smooth running for most, some users still get issues with Windows 10. In this post, we have rounded up the five most annoying problems that users often encounter when using Windows 10. There are also simple steps to fix those problems as well.

By default, Windows 10 will automatically download and install updates. But sometimes, the process doesn’t work smoothly. You might notice that the update could be stuck when downloading, or failed to install at all.

In most cases, it’s because the downloaded files are damaged. Therefore, we will need to refresh the update process and start to download new files.

To do so, press Windows + E, navigate to C:WindowsSoftwareDistribution, and then delete all files that you found inside the folder. If you are unable to remove some files, boot in Safe Mode and do it again. Once complete, reboot your Windows PC and then check for updates to download and install.

No matter how powerful your CPU is, or how much RAM you have, your computer could be running slowly, even frozen when facing high computer resource usage issues.

Many reasons can create those high usage issues, including the problem with Windows Update, viruses, or corrupted files. For example, if you are getting svchost.exe (netsvcs) high CPU usage issue, then the problem may be related to one of your Windows services. Or if you’ve noticed WUAUSERV is hogging CPU resources, then probably the reason is coming from Windows Update.

Depending on each situation, we will need to use different ways to diagnose and troubleshoot these high computer resource usage issues. There is no all-in-one solution to fix them with a few clicks. Therefore, we can use Task Manager to determine what program or service stands behind the issue and stop them from using the resource.

In most cases, reinstalling programs that stand behind those high resource usage problems are always helpful. If the issue is related to Windows Update, try to uninstall recent updates to see whether it’s the cause or not.

Viruses, malware or many other types of malicious programs could be reasons behind these issues. Make sure your Windows PC is safe from those kinds of toxic programs by using a good antivirus software or anti-malware.

3. Unable to Install or Update Apps from the Windows Store

The Windows Store is a useful feature in Windows 10 where you can search for needed apps and install them to your PC with a few clicks, like what you often do on your mobile device. However, if you get any issues when installing or updating those apps, then you definitely have to clean up the cache.

To do so, hit Windows + R to launch the Run dialog box and then type: WSReset.exe and press Enter. You will notice that a new Command Prompt window will automatically open and then disappear. After that, the Windows Store will open, and you will be able to install and update apps as usual.

4. Unable to Connect to Wireless Network

Sometimes, you can’t scan and connect to any available wireless network. The reason is that some VPN programs impact your wireless connection.

All you need to do is to download the latest version of VPN software to make it compatible with your Windows 10. By doing so, you may help to resolve the problem.

If you’ve upgraded the software and it still doesn’t help, launch Command Prompt with administrative privilege and perform the two commands below:

According to a post on Microsoft’s forum, performing the two commands above will help you resolve the issue and be able to scan and connect to wireless networks.

If you’re unsuccessful, then probably the problem is related to the wireless driver. Therefore, you have to navigate to Device Manager and update or reinstall the driver for your Wireless Network adapter.

After upgrading to Windows 10, you might have noticed some default application selections have been replaced by some other programs. For example, your default browser is now Microsoft Edge instead of Mozilla Firefox or Google Chrome. Or you aren’t able to open images with your favorite image viewer anymore.

No matter how good an operating system is, it will never be entirely error-free. Let’s just hope we won’t get a lot of annoying errors and always find ways to resolve them.

5 guides to use inversion tables