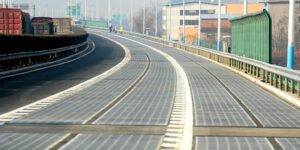 The path to the future could be closer than you think. Today, China has begun to develop roadways that come with their own solar panels installed underneath clear concrete. The PV arrays are intended to charge cares wirelessly when they’re in travel while providing digital assistance for automated vehicles. If the solar roadways are successful, then drivers with electric cars may never again have to worry about finding a place to charge up.

The new project is the second initiative of this nature to take place in Japan, and it will form a section of the Jinan City Express, which covers about 1.2 miles. Already, construction of the new roads is complete, though the city is waiting for a full connection to the grid. With a little luck, the system should be up and running within a few months.

The Jinan Expressway obviously isn’t your average commercial solar power system. Formed using three distinct layers, the road uses a transparent concrete with similar structural capabilities as you might expect from typical asphalt. The middle layer is made up of photovoltaic panels, which are designed specifically to withstand the weight of several cars at once. Finally, the bottom layer of the road separates the panels from the earth beneath and keeps them protected.

According to the engineers behind the solar roadway, the surface should be strong enough to handle mid-sized trucks and additional light-weight vehicles.

Although you’ll need to wait for electrical manufacturers to install the software required to charge your car on the go, it shouldn’t be too difficult for companies like Tesla to start taking advantage of the opportunities made available by the updated roadway.

Currently, no details are available on the type of solar panels involved in the Jinan roadway, though experts indicate that two separate sizes are being used to ensure the utmost reliability for Chinese cars. The panels are also coated with a protective substance to ensure that they weren’t damaged when workers were moving across them.

This isn’t the first journey that China has made into the potential of solar-powered roadways. During 2016, the Quilu development group for transportation invested in the development of the first solar roadway in Jinan. The company took about 10 months to complete the project, and the roadways include 790 square yards of photovoltaic panels.

While some people responded to the solar roadways as little more than a joke, scientists around the world are beginning to test their potential in locations with electrically-powered cars. For instance, the Netherlands installed the first bike path with solar power in 2014, and France developed a roadway of their own soon after. You can visit the French roadway today in Normandy, and it cost the country about 5 million euros. However, France has since established a goal to install another 1000 km of solar roadway.

While there may be some additional research to do before we come up with the perfect solar road, it seems that many governments agree that this could be the next step to a more sustainable future.

5 reasons why you are always feeling low on energy

These Modern Home Gadgets Are Bringing Our Homes Into the Future

An Introduction to the Different Types of Cryptocurrencies