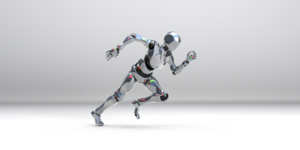 There are many myths and misconceptions out there about bots. Some people hear the term and think of the often inane responses of first generation chatbots and voice assistants, such as SmarterChild or early iterations of Siri. Many others will jump to science fiction references–though some will think of helpful, emotionally sophisticated robots such as Data in Star Trek: The Next Generation, and others will remember stories of AI gone amok such as 2001: A Space Odyssey.

None of these associations fully capture the on-the-ground reality of AI today. The sentient bots of science fiction aren’t anywhere on the near horizon, but AI isn’t just a pointless novelty, either. Thoughtfully designed AI bots have real applications for boosting productivity.

Problem-solving is inherent to the day-to-day human experience. From organizing a packed fridge to composing a coherent email request, the average person’s day is filled with moments where they must identify a problem, assess parameters, and draw on previous experience to find a solution. Even incredibly sophisticated and complicated processes, such as searching for a cure to cancer, can be reduced to a sequence of interlocking problem-solving challenges.

AI bots can tackle these problems just like humans, but they can apply problem-solving principles and analyze data significantly faster and more efficiently. While a human may puzzle over a problem haphazardly, an AI bot can apply a series of tests, analyze data, and record results in a matter of seconds.

Many industries are already using AI bots for complex, labor-intensive tasks. Early stage drug development requires searching through millions of known compounds to find substances that could potentially counteract disease mechanisms on a molecular level. Some drug development companies are now using AI to tackle this immense puzzle, using biomechanical principles to help the programs analyze molecular databases and predict which compounds could be most effective. Health startup Atomwise used such a program in 2016 to identify two candidate compounds for fighting Ebola, a process that usually takes months or years without AI assistance.

Beyond transmitting essential data, an AI bot designed to identify pharmaceutical compounds doesn’t need to know much about talking to its human research partners. But some AI bots are becoming increasingly attuned to emotional intelligence and human speech, unlocking new applications. Woebot is a chatbot that learns about its users through in-app natural language conversations, and then helps them apply cognitive behavioral techniques to boost their mental wellbeing. By applying AI problem-solving techniques to challenges such as human language patterns and emotional sensitivity, developers are slowly but surely creating emotionally intelligent bots who can, for example, provide customer service.

The Significance of Education

Many AI bots and programs incorporate machine learning principles, which allow them to extrapolate from previous input to establish behavior parameters that weren’t included in their original coding. This is how, for example, the Replika chat bot learns to imitate its users unique speech patterns.

Machine learning is a powerful tool, but it has limitations. An AI bot with machine learning capabilities still needs developer input to determine its goals. For some tasks, trial-and-error can only be applied to a limited degree or not at all, so human guidance and oversight are necessary at various points in the design and implementation process. And of course, machine learning can learn from the worst of the input it receives as well as the best, resulting in debacles such as Microsoft’s Tay chatbot, which quickly learned to be racist after spending time on Twitter.

It’s impossible, in short, to remove the human designer from the AI bot scene, no matter how sophisticated machine learning becomes. On the contrary, well-educated, thoughtful AI developers are essential for responsible and truly innovative bot creation in the future.

AIgaming.com came about after its founders recognized the potential of gamification to help AI education and development. On the AI Gaming platform, developers design bots (often by improving or tweaking a basic bot provided by the platform) to play games such as “Travelling Salesdrone,” in which competitors try to design the shortest route for a delivery bot making multiple stops. The result is a competitive, educational community in which developers learn from their gaming triumphs and failures to design smarter, better bots.

This platform combines the educational components of gamification with crowdsourcing’s ability to tackle large and complicated problems. The platform’s blockchain basis means each participant has an immutable, secure ledger of their earnings and accomplishments, serving as an automatically generated “CV” of their AI education. This CV means AI Gaming will eventually become a powerful recruitment tool, allowing hirers to easily access potential talents’ credentials and find the most appropriate candidates for their needs.

The Pros and Cons of Using Cloud Storage Services for Business

You Need A Freelance Writer? The Definitive List of Pros and Cons