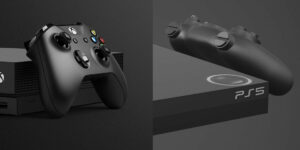 Back in 2013 gamers were treated with two console releases; Xbox One and PS4. It quickly became apparent that this battle of the consoles wasn’t going to be equal, and Sony has since attracted far more gamers than Microsoft’s flop. Many didn’t believe that Microsoft’s choice of name was sensible, simply known as One. However, it was perhaps the lack of power and obtuse appearance that were really more off-putting. With that said, Microsoft has just announced the Xbox One X. Will this new console take on the PS4? This article tries to answer that very question. Let’s begin.

This year’s E3 event was in many gamer’s calendars, since Microsoft were going to unveil their new console. Beforehand, the name provided for this console was Xbox Scorpio. Microsoft unveiled its actual name; Xbox One X. Instant reactions were mixed, was it another strange move from the juggernaut tech company? Quite possibly. Some wanted to create this scenario: You text a loved one asking if they’ll pick up an Xbox One X for you – perhaps on Black Friday. Yet, the X would simply look like a kiss, so instead, you might get the original Xbox One, opposed to the X. Simply put, the name could attract confusion in certain situations and certainly an issue Microsoft’s branding department hadn’t thought about.

Moving on, Microsoft hasn’t done itself any favours within the content department either. The lack of exclusive titles has gradually been highlighted, even by veterans. Sadly, there are no signs that this will change in the future. Sony’s ability to provide an ever-growing number of exclusive games, with a large number grabbing awards, is a real selling point to the PlayStation 4.

What we do like about the Xbox One X is the power it possesses. It will be crowned the world’s most powerful gaming console – and that is a statement to behold within the gaming community. Its aesthetics aren’t striking, it’s a simple looking machine, but it’s what is inside that is of importance. Against Sony’s PS4 Pro, graphically speaking, you will struggle to see a difference. However, loading times and demanding games will perform better on the Xbox One X.

Seemingly, most gamers aren’t demanding a more powerful console, but they are craving content on the consoles they already own. The Nintendo Switch is dramatically lacking content, although this is set to change over time, given it is a newly released console. The Xbox One has struggled to improve its own index of exclusives, and those games that have been released were generally disappointing. Sony hasn’t really had any competition, but even PS4 fans want to see more quality titles feature.

Timing is everything within the world of console releases, it can even ruin a company if they get it wrong. Take the SEGA Dreamcast as an example. Thus, there are rumours circulating that Sony will undoubtedly announce the PS5 in the coming years.

To conclude, I believe that the Xbox One X will sell, but won’t counter Sony’s PS4 console. There are many flaws with the Xbox One X that won’t just be answered by sheer power alone. I would like to end this article with a question: Will you be prepared to stump up $500 for the Xbox One X come November?

The Difficulty With Apple’s Change From Customer To Margin Focus:  Killing The Magic

Tips for iPhone problems you may encounter