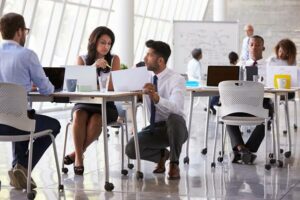 The next step in payment technology, EMV has already been adopted across the likes of Europe and Canada and is now being rolled out gradually across the USA. With one of the biggest problems in the payment industry including fraud and card theft, industries are looking towards EMV as the solution to reduce large amounts of fraud encountered in different countries.

Since France implemented EMV in 2005, counterfeit card fraud dropped by 91%. In Canada, debit card fraud losses fell from $142 million to $38.5 million in 3 years.

Thanks to the change in credit card security, banks are phasing out magnetic stripe cards in favour of a more secure way to pay. Magnetic stripe cards have been around since the 1960s, and companies are beginning to realise that countries should move to a new standard; EMV.

With EMV now deployed in over 80 countries around the world, it’s clear that implementing EMV can contribute to a decrease in fraud. But what’s so special about EMV, and what makes it a necessary step for the payment industry in the USA?

EMV is renowned for its high security measures, making it the new standard for payments across the world. Instead of the magnetic stripe associated with outdated cards, EMV smart cards have a chip incorporated into them. This chip is essentially a small computer, with its own data storage and processing power.

A much more advanced system, the EMV smart card is equipped with advanced security features to make counterfeit fraud almost impossible. EMV cards generate a unique code for each transaction; that code cannot be duplicated or used again. In other words, a fraudster would find it incredibly difficult to use a fake EMV card as it wouldn’t be able to make the code.

The unique code is generated using cryptography, which allows the terminal to authenticate the code itself. Only an EMV chip card that is personalised with the cardholder’s private key can generate a valid transaction.

EMV payments use Dynamic Data Authentication (DDA). Based on public key cryptography, each card contains a unique public and private key pair used during authentication. The card uses one key to generate a cryptographic code, which is sent back to the terminal. This proves the card is genuine.

The second key is used by the terminal to validate the code. In other words, the payment is proven to be genuine. This, together with the unique code per transaction, means that data on EMV smart cards is constantly changing so that it’s hard to extract and copy.

Another important aspect is mobile EMV payments. As many payments are moving towards mobile payments or contactless cards, EMV must also apply to these to ensure the security remains at a high level.

Contact less EMV cards are popular due to their convenience and quick transactions, but with new technology must come new security measures. EMV security applies full protection to mobile EMV payments, including the two-way authentication process of DDA and the cryptographic verification, so that you can relax each time you pay with a contact less card.

Innovative technologies that should make a big bang in 2017.