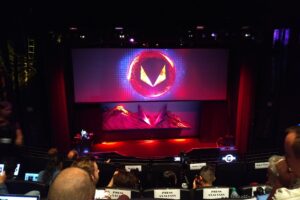 One of the things that has been missing from the PC segment has been real passion. We had it back in the 1990s when PC owners, for a short time, lined up to get the latest version of Windows. And we enjoyed the Intel Bunny men dancing on our TV screens. PC games and productivity products both were improving at a rapid pace and even though laptops truly sucked back then we seemed, as consumers, to be more excited about and more connected to our PCs than we are today.

Well, last weekend, AMD made a strong move to change things back to the way things were and return passion back to PCs when they showcased their latest Threadripper processors and Vega graphics cards.

Let’s talk about AMD and the importance of passion in any market.

You know, at one time, folks were excited about mainframe computers. These are almost magical boxes at the time that were too expensive to buy so folks just leased them. But client/server computing came out, as did desktop computing, and IBM didn’t defend their baby. As a result, the mainframe lost out and Sun, Microsoft, and Apple went into ascension.

Client/server leader Sun decided they were more interested in tarnishing Microsoft than building passion into their own products. The PC folks started thinking more about profit than about building excitement, and as the Internet waxed, PC’s started to wane. Then the iPhone came out followed by the iPad and, just like IBM had neglected to defend their baby, Intel and Microsoft, who had been driving the PC market, both pivoted to mobile products, badly, and the PC almost died.

Strangely, Apple seemed to shift to focus more on profit than passion with the iPad and it too started to decline, bringing the entire tablet surge down with it. Eventually, people felt the PC was declining due to a mass move to tablets was proven false. However, largely due to the lack of demand generation, PCs continued their downward spiral.

That started to change when Microsoft brought out the Surface line of products which slowly seemed to get people excited about Windows PCs again. Well, at least the mobile forms of the product. This suggested that folks could get excited about desktops to but, until recently, no one had fully put that theory to the test.

At least until last weekend, when AMD stepped up and, in front of a large cheering audience, basically announced that passion in desktop PCs was back and they were going to drive it.

From the name of the Threadripper processor to the metal lit case on the high-end Vega consumer products, AMD seems to be thinking about more than speeds and feeds. People get excited about things that look good and have cool names more than they go about performance numbers that may or may not apply to how they work and play. Ideally, they want two things; 1) certainly something that does what they need done, and 2) optimally something they can be proud of and show off to their friends.

In short, the folks that want the cheapest basic PC aren’t the ones that drive demand into this segment, it is the folks that buy or build amazing looking PCs, and/or, create amazing projects using their PCs. Often these folks tend to be both because their need to stand out goes beyond their work product and into the tools they use to create it.
This is the audience that AMD targeted with Threadripper and Vega; the folks that want to create cool things with cool things. These are the ones, be they gamers, engineers, graphic artists or VR Imagineers, that drive the PC market and that drive passion into PCs.

In this latest instance, this was a practical passion because it was clearly more than AMD just throwing around new names and cool looking products. These offerings, particularly together, demonstrated the ability to potentially increase real time rendering capabilities for engineers and graphics artists, and provide extensive creativity upside for those getting into the emerging VR content space with either games or movies. The concept of “better together” is far from new but when its applied to products used to create amazing things, the end result not only increases the capabilities of creators but the number and quality of the amazing things they create.

In short, by putting passion into Threadripper- and Vega-enabled desktop PCs, AMD has taken a massive step from the pain of the here and now toward the ever more greatly imagined virtual worlds of tomorrow. I think we are seeing the beginning of something truly amazing get underway. What comes next from movie and game studios, engineers, artists, and VR specialists will have a lot to with what AMD launched this week.

I can hardly wait till it gets here.

Your ultimate guide to a winning SEO Strategy

What Caused the Takata Airbags to Explode?