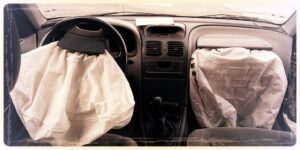 The Takata airbag scandal has led to a worldwide recall of their airbags. The company has been driven to bankruptcy. Many of these dangerous airbags are still on the road due to a lack of replacement parts. This timeline from USA Today shows what has happened over the last few decades in this ongoing scandal.

But what was the science behind these airbag failures? It’s time to brush off your chemistry skills and look at a component called ammonium nitrate.

Airbags work by heating a chemical that rapidly decomposes into a gas. That gas fills up the airbag to catch you when you crash. Vents on the back of the bag disperse the gas so the bag doesn’t explode in your face. The device is packed into a small metal container.

The problem with Takata’s airbags was that the decomposition of the chemical, in this case, ammonium nitrate, was so rapid that it exploded the metal container and sent shrapnel through the vehicle.

Ammonium nitrate, when heated, breaks down into one molecule of nitrous oxide and two molecules of water. It is a volatile reaction, which is important because that volatility inflates the bag fast enough to work.

Two things affect that volatility. The first is water vapor. Ammonium nitrate loves to absorb extra water from the air, transforming the nitrate powder into a solid mass. This is also a common experiment done in science classes to demonstrate endothermic reactions. The solution turns very cold, adding more mass to the compound. The extra mass isn’t removed when heating. Thus, that excess water gets converted into extra steam and puts pressure on the inflator.

Second, in hot areas, the internal heat of the car can be high enough to start breaking down the compound. This internal pressure can gradually weaken the inflator making it unable to correctly explode in an actual crash.

The result of extra gas and a weakened inflator is an airbag that explodes much more violently than expected. In extreme cases, it can break the inflator apart and send metal out instead of a bag.

Could This Have Been Prevented?

Yes, in several ways. First, there are other airbag inflation chemicals on the market that don’t break down as easily in the presence of humidity and high temperatures. Ammonium nitrate is quite cheap since its main use is fertilizer, so it made good business sense to choose that compound over others. And it does work, but time and humid conditions eventually cause the airbag to be faulty.

Another way this could have been prevented was by using a desiccant. A desiccant is a substance that absorbs water and locks it in. Silica gel is a common example. If one were added that was stronger than the desiccant properties of ammonium nitrate, the inflators could have withstood humidity much better. There was no desiccant in the Takata airbags.

Third, the igniter could have had better construction, but that would have increased the price of the airbags. Investigators discovered that there were significant safety violations in the final product in at least one Takata airbag plant. Rust and weak seams may have also contributed to the danger of these airbags.

To see if your car may be affected by this dangerous defect, check out the full list of recalled vehicles from the NHTSA. Millions of vehicles were affected by this recall, so please take a moment to check. It could save your life.

AMD: Bringing Passion Back to PCs

Ways to use technology to improve your restaurant business