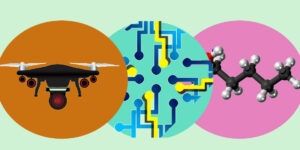 Coined the “Fourth” revolution by the World Economic Forum, we’re currently in the midst of another era of vast technological development. And when compared to previous revolutions, the Fourth is occurring at an exponential rate, ultimately disrupting every industry in the world and blurring the lines between digital and physical domains.

So, what are the expectations for the future of technology and humanity? Here are three emerging STEM careers and fields of study that will help us leap into the future.

Gone are the days when drones were subjects of obscure science fiction films. Today, Unmanned Aerial Vehicle (UAV) technologies are emerging in nearly every industry. From logistics to military operations to environmental conservation, there are countless fields of work already embracing the advantages of this versatile technology.

For example, in agriculture, farmers see a huge spike in efficiency when drone technologies are incorporated in fields to complement manual labor. By quickly gathering high-definition aerial footage, farmers can monitor crop ripeness and adjust water and fertilizer levels accordingly. Additionally, drones make disaster recovery and search-and-rescue efforts more manageable because of their ability to cover more square footage than humans by foot.

With all the opportunity that lies in the future of UAV, we need experts on the ground who know how to build, fly and repair the technology. As the U.S. Federal Aviation Association recently loosened the restrictions on commercial drone usage, we can expect to see promising economic impact. Over the next ten years, drone technologies will generate an estimated $82 billion dollars and create 100,000 jobs, according to industry estimates. For those interested in pursuing a future building, testing and using drones, a computer engineering degree or Unmanned Aerial Vehicle (UAV) engineering degree is typically a good place to start.

One of the biggest problems in treating sick patients is the inability to target the illness on the cellular level. Typically, treatments take on a blanket approach to curing people, which often yields a slew of side effects. In psychoactive medicine, for example, clinically depressed patients are given drugs that suppress some parts of the brain while stimulating others. With nanotechnology, doctors can pinpoint and eradicate “sick” cells individually. This eradicates negative side effects by protecting healthy cells and other body functions.

Ongoing medical trials show promise for future of nanotechnology, as well as the increasing sophistication of robots built by engineers. With all the potential that lies within the field, there’s a growing demand for a specialized workforce to push the science forward. Job demand for nanotechnologists is expected to grow to one million openings this year, and universities are creating nanotechnology degrees to follow suit. Students interested in the intersection of robotics, medicine and logical computing should consider a future in nanotechnology.

A growing topic of discussion in IT department boardrooms is how big data is the “new frontier.” Businesses are learning that big data gleaned from countless system logs, web clickstreams, transactions and social media interactions hold tremendous benefits for their company. They just need help making sense of it.

A big data analyst’s role in an organization is to understand and draw conclusions from massive, seemingly nonsensical data. A trained analyst can pull insights from data that helps companies identify industry patterns, customer behaviors, security threats and system vulnerabilities. Analysts are essentially the liaison between large datasets and the organization they work for; with analyst expertise, companies remain competitive and cutting-edge. Big data analysts have strong backgrounds in computer science, statistics and modeling. They often come from a business analyst role, but recently, more and more analysts are earning a big data analytics degree to fully grasp the evolving industry. The demand for big data analysts is soaring. It’s now referred to as the sexiest job of the 21st century by Harvard Business Review for its projected growth and pay in the next 10 years.

Over the past 10 years, the technology world has demonstrated steady growth and optimism for job outlook. With the 2008 recession barely affecting jobs in the technology sphere, the industry proves to be resilient even in the face of economic fluctuation. For job-seekers looking for careers that offer promise well into the future, consider these career paths in the booming tech world.

How to insure and backup mobile data?

How Secure Will the 2016 Election and Future Elections Be?