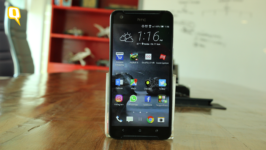 Once upon a time, every smartphone maker worth its salt was trying to make phones as small as possible. Zip to 2016, phones have become smarter and larger. Now, every big brand is following this trend.

Xiaomi was one of the first Chinese companies to bring their high-specced, low-priced smartphones to the market. The brand is here again, after their flagship Mi5 released in April, with the huge – almost 6.5-inch – Mi Max.

Does it fit in one palm? Does it rise above the competition? And most importantly, does it make sense to use this?

Xiaomi Mi Max carries the design philosophy previously seen in Redmi Note 3. The phablet has a metal back with a full glass front with 2.5D curved edges. The phone is light and thin despite the larger screen size.

Coming to the display, the 6.4-inch full HD screen is both its boon and bane. The colours are quite vivid and it definitely adds to the video viewing experience. Watching YouTube videos on this mini-TV screen was a pleasant experience.

With great size comes great power requirements. The 4850 mAh battery on the phone wasn’t very reassuring. However, our concerns were laid to rest with the phone lasting an impressive 2 days on a single charge. Under the hood, it’s powered by a Snapdragon 650 processor, coupled with 3GB RAM.

The camera optics and performance remain similar to the Redmi Note 3. There’s a 13-megapixel snapper on the back and a 5-megapixel camera on the front. The camera produced good results in both natural and artificial light. Although photographs taken in low light do tend to be grainy.

The fingerprint scanner placement on Mi Max is similar to Redmi Note 3, while the camera is slotted at Mi5’s place.

It. Is. Huge! Xiaomi Mi Max’s biggest strength also happens to be one of its sore points. It’s quite cumbersome to carry. The phone may just slip through your hand. You may also need a separate bag (mild exaggeration) to carry this phone.

Mi Max is a tad bigger than Google Nexus 6, mostly because of Max’s thin bezels.

The phone also has a heating problem. A few minutes into a YouTube video, the top of the smartphone became quite warm, getting subsequently hotter. If people call Mi Max a hot piece of technology, they might be speaking literally.

Xiaomi Mi Max has a full metal back, which gets really hot over long usage.

A Man Marries His Phone, It Can Only Happen in Vegas