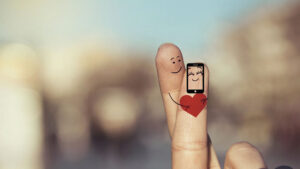 A man in the US has taken his love for smartphones to a whole new level — by marrying it in a Las Vegas ceremony.

The wedding looked like a typical Las Vegas wedding, except for one deviation. The groom, Aaron Chervenak, wore a tux. The bride wore a protective case.

Chervenak said “I do,” when the officiant at The Little Vegas Chapel asked, “Do you, Aaron, take this smartphone to be your lawfully wedded wife, and do you also promise to love her, honour her, comfort and keep her, and be faithful to her?”

“At first it was like what?” said The Little Las Vegas Chapel owner Michael Kelly.

The symbolic gesture to marry his smartphone appeared to be a move by artist-director Chervenak to send a message to society, according to Kelly.

“People are so connected to their phones and they live with them all the time,” Kelly said.

And that almost sounds like marriage. However, the marriage is not legally recognised by the State of Nevada.