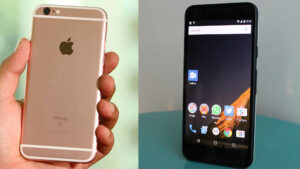 Whenever Google and phones are mentioned in the same sentence, we assumed its about the Nexus series. There is a reason why the search-engine giant has refrained from competing against Apple’s iPhone so far – the Android platform.

However, all that is set to change. Google is actually working on a phone that won’t be called a Nexus. Instead, we might finally see Google battle is out for supremacy in the flagship segment.

We have often heard that Google is content with other brands (OEM) making phones for them, so why the change of heart now? One of the reasons could be that Google is ready to take Android under its wings.

By making phones on its own, Google will be able to offer a refined version of Android – as seen in the Nexus series. This will incentivise users to switch from iOS to Android as they won’t have to worry about getting the latest Android upgrade.

We understand Google’s eagerness to make its own phones, but will they succeed like Apple and Samsung have? We not so sure about that.

Nevertheless, it will be interesting to see what Google can offer and whether its its so-called first-ever high-end flagship phone will be a success.

Game of Thrones: The Season of Ice and Fire – Spoiler Alert