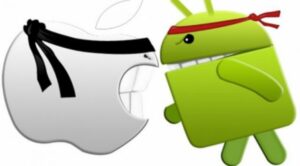 The rivalry between Apple and Google is no big secret, we are familiar with Steve Job’s rants , threatening to go “thermonuclear war” against Android. Business rivalry and competition for market dominance have always been there, it’s a free world (nearly) and as long as you don’t break existing rules, you are free to do what you think necessary to win customers.

Google has quite a few, successful and useful, apps on the  App Store, like Google Maps or Gmail. And now Apple has introduced their first app to Google Play – Move to iOS, it’s an app that helps transfer your data from android to iOS. I mean if you want to lure people over to your system, start with some attractive apps to show the benefits of moving over. It’s like Ronald McDonald walking around Burger King and asking the customers to eat a cold Big Mac. The reactions were predictable, I doubt that they have won many hearts in the Android community but maybe they don’t care, maybe they just wanted to make it easier for the few that have already made up their mind. An Android fan responded with an app called – Stick to Android, when you click the button a message says “Congratulations, you did it”. Guess which app has better reviews.

A tailored microbiome could be the future for successful diets

4chan has been sold to the previous owner of 2chan, who has nothing to do with 6chan