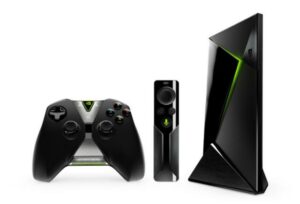 NVIDIA, in concert with Google, launched what appears to be the best next generation (maybe only next generation) set top box in the market with their Shield Set Top Box.   I’ve been using this product for the better part of a week and I’m impressed with how easy it is to use and how powerful it is.  I also have the far less expensive and less powerful Amazon Fire TV and the contrasts are interesting.

Amazon Fire TV comes in two forms an HDMI dongle called Fire TV Stick which is under $40 and doesn’t have voice command built in and the Fire TV set top box which costs under $100 and does have voice command.  Think of this as basic and advanced because the Fire TV set top box is more powerful and, since I’ve played with both, worth the extra money.  You get the Fire TV stick if you have a wall mounted TV and don’t want to deal with mounting the set-top-box on the wall.  The have a game bundle for $144 that includes a game controller as well.

Fire TV is based on Android but it uses a unique user interface that focuses on Amazon content but it will also run a number of other services.  What it misses is Google Play so if you use Android and have a lot of stuff in Google Play you are kind of screwed.

The NVIDIA Shield Set top box comes with a controller but no remote and in two forms.  A basic 16GB model for under $200 and a gamer focused 500GB model for under $300.  The remote is $49 dollars extra.  The big difference between this and the Fire TV is that it will output a 4K image while the Fire TV products are HD only.  Now this offering has Google Play but currently lacks Amazon’s streaming video service but it is in the works so this may be a temporary shortcoming.  One additional advantage is this product connects to NVIDIA’s Grid gaming service which gives it access to PC level games.

The NVIDIA product is also better looking but lacks the mounting options Fire TV has for wall mounted TVs.  I expect there will eventually be accessories for this but for now you’ll have to get a bit creative if you don’t have a handy table to put this on.

Both Fire TV and the NVIDIA Shield Set Top Box are very easy to set up.  Once you log into your Amazon account for Fire TV or your Google account for NVIDIA Shield the device populates though you’ll still have to provide passwords for other services like Netflix and Hulu independently.  While Amazon Fire TV is more than adequate if you want to make your 4K TV shine or play more advanced games the NVIDIA Shield set top box is worth the extra money.  It is a natural accessory for folks that have a 4K TV.

One interesting possibility here is that either or both of these products could run the TiVo Android client giving you one set top box to handle your DVR content distribution as well.  As noted the Shield product is expected to pick up Amazon Streaming and it seems unlikely Fire TV will ever get Google Play.  When this happens it should become not only the more powerful box but the more complete of the two products as well.

NVIDIA has been aggressive on applying game content on their Grid Gaming service and this should remain a competitive advantage for the product as well.  Amazon is using Grid in their Web Services offering so it is at least possible that Amazon could have something similar but the just haven’t been as aggressive on gaming as NVIDIA.

If you have a 4K TV and are looking for 4K content from movies and TV shows to games the NVIDIA Shield is one of very few ways to get this content.  It should also become the more complete of these two products with regard to covering the major content services of Netflix, Google Play, and Amazon Streaming so it should eventually have utility that Fire TV lacks so it may be a better strategic long term product than most others.

Chris Pine Up For Role in Wonder Woman Movie

Dell DAAC vs. HP Discover: Why Dell is Winning and HP is Failing