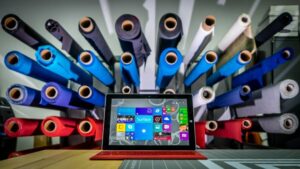 Today Microsoft announced their Surface 3 offering and I had a chance to play with one last week for a bit.  This product showcases the rule of 3s, (that the 3rd version of a product makes the biggest step towards actual user needs.  I was actually one of the few fans of Surface RT which initially made more sense (given the tablet goal) then Surface Pro but couldn’t get over the fact that Intel, which controls the x86 platform that Windows resides on, didn’t have a competitive mobile part.   Well now they do and Surface 3 is as much a showcase for what Intel has done as it is a showcase for how far Surface has come.  But Surface 3 is only one half of the solution the other is Windows 10 and it will be when Windows 10 ships on Surface 3 that the true magic will happened.

The reason it takes three versions to get a new product right is that the first version is a crap shoot.  The vendor has some ideas of what the consumer/user should want but it is just a guess and even the user may not know what they really will buy until they see and use the first offering.   The second version generally captures some of what was learned by the first version but comes too soon for the hardware component suppliers to really react to the information and that is why the 3rd version typically makes such huge strides, the component folks finally get to market their response and you get, assuming people listened (which isn’t always the case) that Perfect Storm match of product capabilities to user wants and needs.

We saw this with Surface.  The first versions had a bad tradeoff with the Pro version being heavy, power hungry, and expensive reflecting the state of laptop technology at the time.   The RT version showcased that Intel really didn’t have a mobile part yet and wile it, because it used cellphone/tablet parts, was priced right, was comparatively light, and had acceptable battery life it didn’t have many apps.   It was a decent email system but as the Android and Apple products improved it’s one trick of just doing Office just wasn’t good enough and the fact it wouldn’t run any real legacy code meant rather than being the most popular, it became the least popular, version of Surface.

Intel running as fast as I’ve ever seen them move developed the Atom processor to actually provide an acceptable balance of efficiency and performance thus the Surface 3 runs x86 applications and has the battery life, price, and weight that folks accept in a tablet.   This is almost the product that people have been waiting for and now Pro is for people that need more performance and are willing to make sacrifices for that performance (price and weight) and Surface 3 is for those that wanted a tablet that would run Office and their legacy x86 apps.

However this is really only half of the final solution.  Windows 10’s secret was that in beta it effectively did what Windows 9 would have done and both fixed Windows 8 and advanced it.  You can do things with software you can’t do with hardware and one of those things is to slipstream in an interim version and conceal it as a Beta.

I didn’t figure this out myself until just recently, the wide spread Windows 10 Beta did what Windows 9 would have otherwise done but more quickly effectively bridging the first version “8”, with the best version “10”.  It looked like we skipped 9 but it was right in front of our faces just with another name.  As a result the best version of Surface 3, including Pro, will be the one running Windows 10 which is a free upgrade from 8.

Surface 3 is as much a showcase for Intel as it is for Microsoft, hell until Windows 10 ships, it is actually more of a showcase for Intel as to just how far they have come since Surface launched.  This should be the closest thing we have yet seen to a no-compromise productivity tablet and you finally get a decent choice.  We move from two tablets neither of which is particularly good at being a tablet to two tablets that are decent tablets but one that is more tablet and the other (Pro) that is more Ultrabook and an operating system that is actually designed to make a tablet sing.

Just remember the rule of 3s when you look at Surface and remember that waiting till the 3rd version of a series, at least in tech, is often worth it.