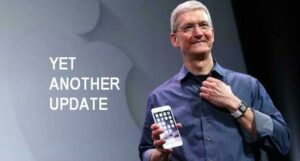 Things move at lightning speed in the tech industry these days. Now you can screw things up in a few hours that would have taken months to screw up just a few years ago. But you can also fix things just as quickly…well, maybe.

Apple apologized for the little glitch in their iOS 8.0.1 update released Wednesday morning that broke people’s ability to make phone calls (yes, people still make phone calls) and the ability to use Touch ID (sort of a critical component of Apple Pay, although the feature isn’t supposed to roll out until sometime in October).

It took Apple only about 80 minutes to realize that iOS 8.0.1 had problems and quickly pull it out of circulation. At which point I imagine there was quite a bit of screaming and a lot of thrown furniture deep in the bowels of the iOS 8 programming team headquarters. And I don’t imagine any of those top-level programmers went home Wednesday night.

And like fairytale elf cobblers the Apple programmers worked through the night and in the morning there was a brand new pair of shoes called iOS 8.0.2 that theoretically fixed all the problems that iOS 8.0.1 created and the problems iOS 8.0.1 was supposed to fix in the first place.

Apart from letting people use their iPhones as…well…phones and re-enabling the Touch ID feature, the new update fixed other problems like a bug in the HealthKit software, a bug that disabled 3rd party keyboards, a bug that wouldn’t allow certain apps to access photos in the Photo Library, improved the reliability of the Reachability feature, fixed an issue with data usage when accessing SMS/MMS messages, improved support for Ask To Buy for Family Sharing for In-App Purchase, fixed an issue with ringtones not being restored from iCloud backups and it fixed a bug that prevented people from uploading photos and video from Safari.

Of course, barely 24 hours after the release of iOS 8.0.2 reports are already trickling in from people that claim the new, new update still doesn’t fix the inability to make calls or the Touch ID problems.

We’ll just have to wait and see if there is an iOS 8.0.3 released in the next few days. I just hope that someone in the programming team can get a little sleep before the next round of problems show up.