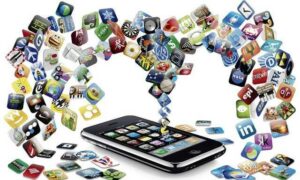 Recent reports from UK researchers suggest that we may be reaching the peak of the app download boom.

In spite of the fact that Apple and Google (and even Microsoft) are still touting amazing growth in the number of apps they have for sale and the amount of revenues they generate from sales of those apps, there have been a few studies coming out that suggest that the number of apps downloaded may be slowing.

A recent Deloitte report found that the number of apps downloaded in the past 12 months has dropped from an average of 2.3 per person to 1.8 per person and the number of people who don’t download any apps at all has grown from about 20 to 31 percent.

Studies also show that a large proportion of people who get a new smartphone download only a handful of apps and once they get the things they want or need, they simply stop shopping for apps. This trend is most pronounced in older smartphone users – younger users tend to keep going back for more.

These trends could be due to a number of factors. App-overload (there are simply too many apps in the app stores to wade through). App-apathy (it used to be cool to download the latest and greatest new apps but the novelty has worn off). App-apprehension (we’ve heard too many stories about malware-infected apps and are growing wary of any new apps). App-efficiency (apps are getting better so we don’t need to download dozens of them to do the work of one).

Or it could simply be App-saturation (we’ve already downloaded pretty much everything we need already and don’t need any more).

I tend to think it reflects an age old software situation. When it comes to productivity software people tend to buy a product only once (how many word processors do you really need?) and once they learn how to use particular software packages they tend to stick with them.

Games are one of the few categories of software that people buy over and over again and, as we all know, games are the domain of the young.

So are these new numbers really heralding an inevitable decline in the booming app market, a simple slow down or are they what the stock market would call a normalization? I think it’s a bit of all three. Now that the app market seems to have matured a bit since its wild-west beginnings people can find useful apps that do what they are supposed to do and don’t need to download twenty different apps in search of one that fulfils their needs. I also think the luster is fading a bit and it just isn’t all that cool to have 100s of apps on your smartphone simply because you can. And I think people are getting smarter about which apps they download and how many they really need.

Of course, there is always the ‘next big thing’ right around the corner and these days you can bet there will be an app for that.