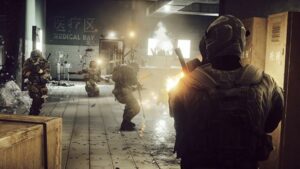 In my opinion, graphics chips are without doubt one of the most powerful, exciting, and essential components in tech today: not only does every computer require one (or more), but the technology is entering into major new markets like supercomputers, remote workstations, and simulators almost on a daily basis. New technologies and compute programs are taking advantage of the ability of GPU power to scale. On top of that, PC gaming momentum continues to build. It would be no exaggeration to say that GPUs are becoming the 800-pound gorilla in the room.

In our latest Market Watch report, available now, the big drop in graphics shipments in Q1 has been partially offset by a small rise this quarter. Shipments were up 3.2% quarter-to-quarter, and down 4.5% compared to the same quarter last year.

Here are some of the highlights of the report:

GPUs are traditionally a leading indicator of the market, since a GPU goes into every system before it is shipped, and most of the PC vendors are guiding cautiously up to flat for Q3’14.

The Gaming PC segment, where higher-end GPUs are used, was a bright spot in the market in Q1. Nvidia and AMD high-end GPUs sales were strong, lifting the ASPs for the discrete GPU market.

Is the app frenzy really slowing down?