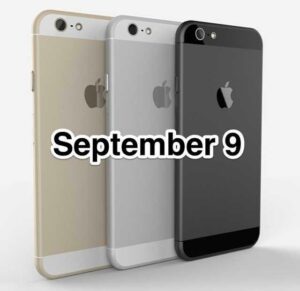 It’s official – Apple will be holding a press event on September 9 and they’ll probably talk about new iPhones.

That’s about all that anyone really knows so far. The company has not responded to any questions about the event other than the date.

As we all know, Apple’s annual events held in Septembers past have usually been preceded by more fanfare and speculation from the media about the screen sizes, processors, colors, prices and features of whatever new device (or rehashed old device) Apple might announce. It’s become something of a game of ‘who can guess closest.’ (An iPhone 6 is the current favorite, btw.)

And it doesn’t really matter who wins (well, actually Apple usually wins) since whatever they announce is sure to draw a lot of ‘ooh’s and ‘ahh’s. And people will place their preorders or queue up in some line to be among the first to plunk down their money for whatever new iDevice Apple unveils.

The interesting thing is Apple hasn’t had to spend a dime on marketing since the press is more than happy to promote whatever rumor they can get their hands on.

And then a few weeks after the hardware geeks have had a chance to pop open their new iDevices and try to figure out how they tick, they’ll write articles about how wonderful they are and how they stack up against all the other devices out there.

Ironically, if Apple doesn’t announce something wow-inspiring on September 9 then the media is going to be a little miffed about it and start writing the same old weary stories about how Apple has lost its edge.

Anyway it’s all good fun and other than Labor Day (and Grandparents Day) there aren’t many holidays worth celebrating in September so we might as well hold our collective breaths in anticipation.