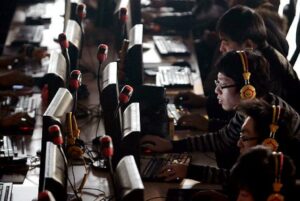 Irony is a funny thing, unless you are Apple. While Chinese manufacturers reap the benefits of making iPhones and iPads, Beijing is protecting its own markets by banning the very same products as foreign threats to its security.

The Chinese government has banned ten Apple products including the iPad, the iPad Mini, and all of the MacBooks. The information on the band has been leaked by “unnamed officials” who have access to a June version of a list drafted by the National Development and Reform Commission and Ministry of Finance.

While China is the second biggest market after the US for technology products, the Chinese are clamping down harder than one would expect on foreign suppliers since the US government indicted Chinese military officers for industrial espionage last May.

The revelations of wholesale spying by the NSA, as revealed by Edward Snowden, have also left a market and created deep distrust in the Chinese, much as they have in Europe. You can’t fault the Chinese in that regard.

Apple isn’t alone in being caught up in the anti-US tech hysteria post-NSA. The Chinese have also been targeting IBM, now Apple’s partner, and Microsoft, among others, for scrutiny as potential national security threats.

And, if the irony of a Chinese government banning products made in China isn’t bad enough, there is the further irony that Chinese consumers may actually be more inclined to want Apple products if government agencies don’t want them.

So, it sounds bad, but it is meaningless in the long run to worry about from a purely sales point of view. However, with Apple and IBM joining up to do more together, there is enough reason for both to be concerned about the opportunities now available to them to reach into Chinese government bodies with their products.