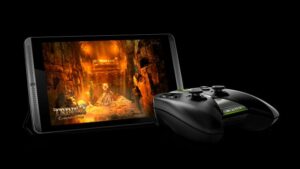 Most of the tablets you see in the market look like their designers came to the conclusion that they could make a cheaper iPad.   The one distinguishing feature is that the tablet costs less, does less, and feels cheap.  Personally I don’t see much point to creating a cheap knock off largely because I just don’t think there is any pride in the act.  Sure there is some risk in building something different but if it is successful it your idea, your initiative, your design not rip off.

The NVIDIA Shield Tablet available today is like that.  This is a tablet designed by gamers for gamers.   It is the latest addition to the NVIDIA Shield line and while it does have the typical tablet look it is by no means an iPad clone.

In your hand this tablet has weight, it feels like a piece of serious gaming gear and it has an optional controller that really isn’t an option any more than good tires are an option on a sports car.  You need the controller which uses WiFi direct (lower latency greater range) to connect to the tablet.   Unlike the original Shield, which I also have, it isn’t for hand held gaming really.  You need a table to put the tablet on (I’m not a fan of playing off my lap).  The cover turns into a stand and you are ready to play.

Stereo speakers have decent sound though, I expect, most that use this will use a headset or earbuds because you can crank it up without driving folks near you nuts.  The screen is wonderful, good visual performance clearly tuned for games and it showcased I have yet to find an Android shooter I really love.   Thank heavens there are a variety of cloud streaming services and this product anticipates the spread of the NVIDIA Grid cloud gaming service now in beta in the San Francisco Bay area.   This service provides PC level performance streamed with low latency to tablet devices and this tablet is ideal for a service like that or OnLive (which has been in market for a while).

I’m fascinated how artists can create amazing things on the iPad given it really has a low quality pen interface.  This is one other area the NVIDIA Shield Tablet stands out, it has a very accurate stylus interface and, if you are artistic, (you given both my mother and step mother were artists you’d think I’d have that skill but don’t), this could make a fantastic sketch pad.

It comes with a painting App called Dabbler which I haven’t had a chance to play with that much, ah who am I kidding, I can’t paint but it looked cool and for someone with that skill it could be a great way to pass the time artistically.

8” Tablet with an Attitude

In the end the NVIDIA Shield Tablet is an 8” tablet with an attitude.  It isn’t a Kindle though I will run the Kindle app just fine and it uses the Google App store so it actually has more games than my Kindle does.   It isn’t an iPad Mini light, it is a product designed by and for gamers.  And I am one, for instance I just spent most of the last 5 hours on a plane from San Francisco to New York and I gamed for much of the trip which actually went by very quickly.  Having a tablet that does this well is a god send for a unique few of us.  If you love you iPad or Kindle this may not sway you but if you’ve been looking for something that scratches your gaming and artistic itches the NVIDIA Shield Table may be your cup of tea.  It was mine.