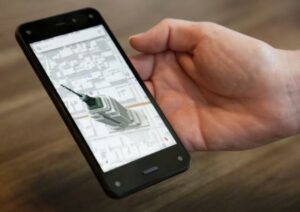 Amazon launched their Fire Phone yesterday and it is an impressive phone. It comes the closest to an iPhone like effort but with a distinctive Amazon spin. That means much of the effort is in the back end of services that surround the device and the phone itself is simply an attractive way to bundle these services into a product. However they copied Apple is one unfortunate way and that is the one glaring miss in this announcement. Let me explain.

Amazon Store In Your Pocket

The key thing to remember about all of Amazon’s mobile products is that they are effectively a store in your pocket. This phone accentuates this effort even more than the Kindles do with Firefly (which I expect will eventually make it to the Kindle platform). This app/service allows you to take pictures of objects you want to identify and it will listen to music both tied to finding the item on Amazon and making a quick purchase. With Amazon’s same day delivery there is an increasing chance you could go shopping and have a majority of the items you scanned be waiting for you when you returned. This certainly would work particularly well if you were traveling.

This capability is at the heart of why Amazon is doing devices because the value of putting what is in effect an Amazon store in your pocket is nearly invaluable.

If you haven’t tried this on one of the new Kindle’s it is kind of magical.  You basically hit a button and you are connected in a video conference to an Amazon support employee. This actually works better on the phone than it does on the Kindle because most of the Kindle tablets that have this feature are WiFi only and this service only works if the device is connected. Smartphones are nearly always connected. For you Apple iPhone and iPad users this is very much like having the Genius Bar in your pocket and it is actually a ton better to be able to talk to someone. I’ve used this service several times to work through complicated menu items and I’ve found it to be invaluable.

You need something that gets people to go oh wow that doesn’t cost money and while Mayday is kind of an Oh Wow experience Amazon would prefer folks didn’t call to show it off because unlike Siri or Cortana it uses real people. The 3 D feature on the Amazon phone uses infrared sensors to see your face so the display can provide depth to an image and orient that depth to your viewing angle. Now the only problem is this doesn’t work very well if two people are trying to use the same phone but fortunately most of us share our phone by handing it to the person we are sharing with or facing the display towards them which should work just fine. I expect we’ll see some interesting applications for this going forward but it does look cool and you don’t need glasses.

This is Qualcomm’s most powerful platform and if you are going to create a phone that captures the imagination and will run all of the performance intensive applications this phone has this is likely your best choice in Qualcomm’s portfolio (currently they lead in high end phone like the Fire Phone).   It is what makes the 3D capability possible.  Often vendors cut costs with the processor changing an otherwise brilliant product into a dog and Amazon to their credit didn’t cut corners here.

AT&T for a Miss

AT&T stepped up like they did with the iPhone and cut a very attractive deal for Amazon but like Apple users probably aren’t going to appreciate this move that much. A better choice would have been T-Mobile because they are currently the most aggressive with regard to customer acquisition and, as a result, they have the most user friendly pricing and services. There market expansion efforts would dovetail nicely with Amazon’s.

In the end a device that is to accentuate your store presence needs to optimize for the user not Amazon so they are more likely to rave about it and AT&T’s service tends to lag the other three in the US on customer satisfaction.    The idea of doing an exclusive flies against the goal of getting as many people to use the device as possible.   But Amazon isn’t stupid so I expect this exclusive arrangement won’t last long.

The Amazon App store lags both Apple and Google but quietly yesterday Blackberry announced they were embracing it. Blackberry is the remaining business focused platform in the market and they had the top Smartphone before Apple took the market. This connection to Blackberry could expand significantly with connections to Amazon Web Services over time and with the expectation they will take their desktop hosting business more aggressively to hardware. Neither Apple nor Google have as strong a business story as Amazon does right now and this could turn into a big advantage over time if this relationship strengthens and Blackberry effectively becomes Amazon’s mobile business solution.

Wrapping Up:  It Isn’t an iPhone But…

It isn’t an iPhone but it borrows from that model heavily with music and movie services that are as good as or better than what Apple currently has in market. They lag on their App store but with Blackberry they have an opportunity to go where Apple and Google have yet to go into a more business oriented line. Their Firefly, Mayday, and 3D features solidly differentiate the solution from the other efforts in market and their use of the Snapdragon 800 gives the phone the performance to stand at the top of the heap in terms of high end Smartphones. As a first effort this is actually in line with what Apple did and given they are preserving margins they should have the budget to market this phone heavily.

The Amazon Fire Phone has the potential to upset this market but likely not until it can move beyond AT&T to the other carriers and especially T-Mobile where it should have the greatest synergy (currently T-Mobile is featuring iPhones in their try it before you switch program and these could easily be Fire Phones for instance).