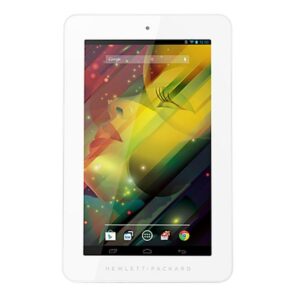 HP has started promoting a new 7” tablet for the budget-conscious crowd. The HP 7 Plus is available on the HP website for $99.99.

As a number of websites have pointed out, the HP 7 isn’t the most powerful tablet on the market – it uses an ARM Cortex-A7 (1 GHz, 4 cores) running Android 4.2.2, Jelly Bean. Its battery will only keep the tablet running for about five and a half hours. It only has a mono speaker. The resolution is 1024 x 600. The cameras are not terribly impressive either at 2 megapixels rear-facing and .3 megapixels front-facing.

It does have a micro USB 2.0 port, 1 micro SD expandable (up to 32 GB) port, an integrated microphone and a 3.5mm headphone jack. It comes with 1 GB DDR3 SDRAM and 8 GB eMMC internal storage. It also has 802.11b/g/n (Miracast compatible) WiFi but no phone capabilities or Bluetooth. It does have an accelerometer, presumably for playing games but no GPS.

While the techies out there who care about things like what version of Android it has or how average the processor might be might poo-poo the HP 7, it should be fine for anyone wanting an inexpensive device for surfing the web, playing games or watching videos.

What really sets this tablet apart from the dozens of other cheap tablets out there is the HP brand. If I had a choice between five tablets that all cost under $100 I would have no qualms about picking up an HP product over a tablet from a company I’ve never heard of.

HP has a very good reputation and that counts for a lot. The average Joe or Jane doesn’t really care about processors, OS versions, megapixels or screen resolutions. What they do care about is getting a quality product that does what it says it will and if they can’t make head or tail of a spec sheet the only thing they can rely on is the brand behind the product. A lot of people are going to say ‘I don’t really know about all this stuff, but if HP says this is a reasonable product then I’m going to take their word for it.’

Of course, if the HP 7 Plus turns out to be a real piece of carp then you can toss that reputation out the window.

You can read more about the HP 7 Plus (and even order one) at the HP Home and Home Office store here.

Are drones the future of pizza delivery?

Stolen eBay data up for sale – but is it really from eBay?