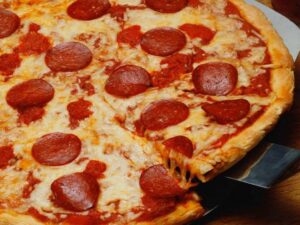 According to Britain’s Daily Telegraph:

An Italian restaurant in Mumbai, India, has grand plans to revolutionise its delivery system – by sending its pizzas airborne using a flying drone known as a quadcopter.A video posted on YouTube shows the pizza being made and boxed in the restaurant before being attached to a tiny model aircraft with four mini-propellors which flies out through the doors, up above Mumbai youths playing cricket, along the city’s Arabian Sea front, through skyscrapers to the top of a tower block where its customer is waiting on the roof. According to Francesco’s chief executive,Mikhel Rajani, the restaurant was inspired by Amazon’s plans to use drones to deliver books. Francesco’s Pizzeria chief executive said the drone had cut delivery time to 10 minutes from 30 and he expects air-borne deliveries to be normal within four years. “The delivery system now involves motorcycles, fuel costs, and salary for the delivery boys and often miss deadlines to deliver. Delivery using drones will not only economic but also eco-friendly”, he said.