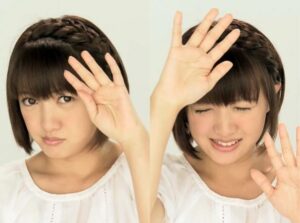 Watching Cute Girl, the somewhat creepy iPhone app, is now available for free in the App Store. The app, originally released back in 2012 at a price of US$3.99, wasn’t a terribly big hit, but now that it’s free maybe more iPhone users will release their inner peeping Tom.

Watching Cute Girl from Ningen is exactly what the title implies. It’s a collection of over 180 video clips of a cute girl who moves, looks around, but mostly just stares at you and occasionally speaks. According to the app description Watching Cute Girl is designed to be a companion when you’re lonely and just want to see another human face. The creators of the app suggest taking her to dinner with you, working with her on your desk, or simply staring at her when you “want to feel eyes from someone.”

According to a post by Mike Wehner on the TUAW (The Unofficial Apple Weblog) site, “Sometimes she doesn’t even speak words, she just lets out a little chirp and smile, which ramps up the creepy level a great deal. Poking her or shaking your phone causes her to get upset, which I imagine would also be the case if you were to poke or shake an actual girl, so I guess that makes sense.”

Reminiscent of Furbies or the Japanese toy Tamagotchi introduced back in 1996, Watching Cute Girl doesn’t really do very much other than stare at you and occasionally blurt out random bits of gibberish (only in this case it’s Japanese).

Now if they can somehow link it to Siri or Skyvi, Iris, Robin and Vlingo for Android or Maluuba for Windows 8, then they could elevate the weirdness factor quite a few notches higher.

There are obvious similarities to other robotic helpers that have been portrayed in movies pretty much since the dawn of movies – Metropolis, Forbidden Planet, Colossus: The Forbin Project, 2001: A Space Odyssey, I Robot and most recently Her just to name a few. Of course the robot ‘helpers’ in most movies usually turn out to be bad guys and as a general rule they aren’t terribly cute (although the robot in Metropolis might be considered slightly sexy).

When I first read about Watching Cute Girl I have to admit the first thing that popped into my head was a line from Joe Versus the Volcano (one of my favorite movies that doesn’t have anything to do with robots) – I have no response to that.

Now if you want to be Watching Cute Girl too you can download the app here.

So change your eBay and PayPal passwords already