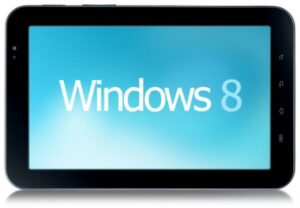 I was over at Intel earlier this week to listen to a couple of their technology partners. I learned some rather interesting things like what makes Chinese manufacturers different from their Taiwanese counterparts. But one of the most interesting things was how these companies plan to have a bunch of aggressively priced Android and Windows based products in market in the second half of this year with $100 as the target unsubsidized price.

In listening to the Chinese manufactures and where they are seeing volume both inside and outside of China consensus appears to be that 8” is becoming the ideal tablet size. Larger is just too big and heavy for much of what you want a tablet to do and you’ll largely be happier with a laptop because the big stuff is targeted more at folks that want to run productivity apps now. 7” and smaller is getting close to where phones are going (now drifting up over 5”) and phones are better phones. But at 8” you get to a size that is too big to hold up to your face as a phone, but better for web browsing, reading (more words on the page), and video watching.   This seems to be the new ideal size for tablets and what helps is that screens in this size class have recently dropped like a rock in cost making these devices look like a bargain.   Windows and Atom

Both Microsoft and Intel were caught by surprise that tablets became so popular and both companies have been running around like crazy trying to catch up. Intel has been pushing hardware development and Microsoft has improved Windows 8 twice and reduced pricing sharply for small devices like 8” tablets. The end result, according to the Chinese manufactures, will be 8” tablets in the $100 price range in retail before the end of the year.    Importance of $100 Price Point

The $100 price point is almost the Holy Grail of pricing. It is often referred to as the price below which permission (from parents or a spouse) isn’t required. Typically when a product drops below $100 demand goes vertical particularly if products like it had been selling for much more. Recall that when HP killed their Palm based tablet, which wasn’t selling, they offered it for $100 and immediately had so much demand they pissed off some retailers and actually had to make more of them at a loss to preserve the relationship. That product went from uninteresting to everyone and their brother wanted one as a result of a $100 pricing action.    China vs. Taiwan

I found this last little tidbit interesting so thought I would share it. Apparently Taiwanese manufactures are great at building things against a set spec. Lots of volume but every product is the same.  Chines Manufactures are better at building against a more fluid spec. They can build high volumes of things that aren’t that similar so having lines with different hardware and OS configurations is something they do well and the Taiwanese try not to do at all. This suggests, given this wave is being driven out of China, we’ll get a lot of interesting choices when these $100 tablets show up in time for Christmas.

Given what happened to HP with the Palm tablet a $100 tablet running Windows 8 could be massively popular given that folks are more used to Windows products at $1,000. A massive price reduction like this could be just as massively successful and the next version of Office could actually run rather nicely on a smaller 8” screen. The second part of the year could represent one hell of a ride. Folks love a bargain particularly around the holidays and it appears Intel, Microsoft and a bunch of aggressive folks in China are going to give them one.