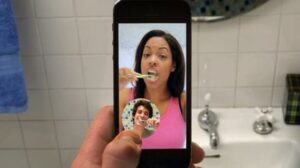 Messaging apps are adding features faster than a high school girl can text and you have to wonder if this is organic expansion, me-too-izm, or a rush to grab as many new users as possible in a bid to become the next big buy out.

Ever since Facebook coughed up $19 billion for WhatsApp it seems like the big boys are on the hunt for messaging companies with hefty user bases rather than trying to jumpstart their own. After all, if someone wanted to spend $19 billion dollars they could probably develop a pretty impressive messaging service of their own. But apparently it’s easier to just open up the old bitcoin wallet and buy users from someone else.

Earlier today Snapchat announced that they were adding text and video chat services to their portfolio of features that already includes their popular self-destructing photo sharing. Snapchat’s text and video chat features are the app’s first updates since it launched Stories in October.

An article posted on the Information Week website (among others) written by Kristin Burnham goes into more depth about the new offering. (You can read the entire article here.)

As Kristin states, “These new chatting capabilities put Snapchat in competition with a number of other popular messaging apps, including WhatsApp, which Facebook acquired, WeChat, Kick, and Facebook’s own messaging app, Messenger.

“The mobile messaging push has heated up in recent months as number of sites and apps have added chat and photo-sharing features. In December, Instagram rolled out private messaging, which lets you send photos and videos privately with up to 15 of your friends. Twitter also updated its iOS and Android apps in December, adding the ability to direct message photos.”

‘Heating up’ is putting it mildly.

You have to wonder if the mobile chat and messaging world is heading into a maelstrom where there are so many apps boasting so many features that no one will be able to gain dominant market share. Then again, this space has been dominated by teenagers and we all know how fickle teens can be when it comes to fads. Teen reactions to Snapchat’s new features could easily become ‘OMG Snapchat video is so three hours ago!’