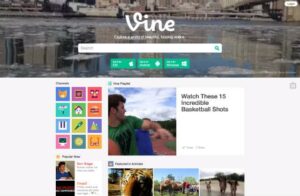 A lot of YouTube ads let you skip to the main video after 5 secs. Well, that’s about all the time you need for your typical Vine video. So, maybe you need to think about leveraging the power of Vines over mimicking traditional video advertising which often annoys rather than excites you on the web.

Until today, you could only watch or work with Vine videos through its mobile app. But now there’s Vine.co, a sort of YouTube version of Vine that doesn’t need an app, or a log-in, for you to search and browse Vines on the web.

You can also watch you Vines in TV Mode which is a recipe for epileptic shock but pushes Vine into YouTube like viewing experiences and may herald higher quality video packets.

If YouTube has taught us anything it is the need to punctuate online video and that’s where Vine’s restrictive 6 second only rule is so great. By forcing users to adopt the 6 second format the emphasis on creativity is much greater than on typical web video where you might, for example, run across 30 minutes of someone reviewing a 2 minute movie trailer.

So, as a branding tool, Vine has a tremendous number of possibilities now because it forces marketers to get their message out in 6 seconds or less and you have to believe that almost anyone who gets access to a Vine ad will stick around for at least 5 of those seconds.

In other words, Vine may be helping to rewrite video messaging, for the better because it is now more readily accessible.

It’s a smart move by Vine. There may not be any demand for Vine ads right now but a well thought out and executed 6 second Vine is more valuable than any 30 second pre-roll on YouTube.