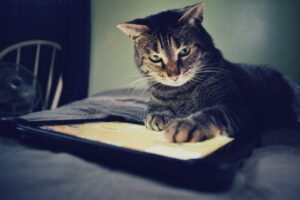 The latest market research is clear on what’s happening in the tablet market and there is some cause for alarm:

Worldwide tablet plus 2-in-1 shipments slipped to 50.4 million units in the first calendar quarter of 2014 (1Q14) according to preliminary data from the International Data Corporation (IDC) Worldwide Quarterly Tablet Tracker. The total represents a sequential decline of -35.7% from the high-volume holiday quarter and just 3.9% growth over the same period a year ago. The slowdown was felt across operating systems and screen sizes and likely points to an even more challenging year ahead for the category.

“The rise of large-screen phones and consumers who are holding on to their existing tablets for ever longer periods of time were both contributing factors to a weaker-than-anticipated quarter for tablets and 2-in-1s,” said Tom Mainelli, IDC Program Vice President, Devices and Displays. “In addition, commercial growth has not been robust enough to offset the slowing of consumer shipments.”

Apple maintained its lead in the worldwide tablet plus 2-in-1 market, shipping 16.4 million units. That’s down from 26.0 million units in the previous quarter and well below its total of 19.5 million units in the first quarter of 2013. Despite the contraction, the company saw its share of the market slip only modestly to 32.5%, down from the previous quarter’s share of 33.2%. Samsung once again grew its worldwide share, increasing from 17.2% last quarter to 22.3% this quarter. Samsung continues to work aggressively with carriers to drive tablet shipments through attractively priced smartphone bundles. Rounding out the top five were ASUS (5%), Lenovo (4.1%), and Amazon (1.9%).

“With roughly two-thirds share, Android continues to dominate the market,” said Jitesh Ubrani, Research Analyst, Worldwide Quarterly Tablet Tracker. “Although its share of the market remains small, Windows devices continue to gain traction thanks to sleeper hits like the Asus T100, whose low cost and 2-in-1 form factor appeal to those looking for something that’s ‘good enough’.”

So, we have some growth, but the outlook is not great. Most of this is bad news for the tablet makers, but for application developers it is clearly not a case of people growing tired of tablets. They just don’t want to upgrade as much.

Tablet makers have also done a relatively poor job of getting their products into the hands of businesses where there are clear advantages to these devices over traditional desktops and computing terminals. There is still a great deal of opportunity to create service and applications that highlight the value of tablets as workplace tools over and above traditional PCs, for example.

Unfortunately, the enterprise is probably a few years behind consumers on this one, and with Apple enjoying such a dominant position, the competition has probably been less focused on businesses than consumers.

That should change as lower cost Android tablets continue to make headway in the market. Windows tablets make an entry, mostly due to hybrid laptop/tablet devices but until Microsoft gets serious about its tablet strategy and gets over the Surface debacle it is going to be an insignificant driver of the market.