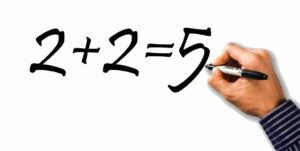 Many people (restive math students in particular!) believe that math is something you either understand or you don’t, and it’s just not something you can learn to understand. But this isn’t true at all.

Math can be understood by anyone, and the more you practice, the easier it gets. That’s because math doesn’t only consist of memorizing formulas and punching them into a calculator to arrive at an answer.

Math is a combination of problem solving, logic, precision calculation, pattern recognition, and spatial and sequential ordering. It also requires the ability to self-assess your work as you go along, to identify potential problems as soon as possible.

Since multiple brain functions are required to be active at the same time, it stands to reason that, if you have difficulty with math problems, you might be less proficient in some of the specific skills listed above.

You might be able to solve equations to a certain point, but often get stuck at the same step. The areas where you get stuck could be places that require a different type of brain function you might not have fully developed yet.

The heartening news is that the more you work actively on math problems, the more you’ll develop the skills to solve increasingly complex problems. Math is in effect the language of the universe: the more you understand it, the easier it is to see how we’re all surrounded by math.

When you’re solving complex math problems, you’re going to need to rely on your memory to pull up equations and recall math facts as well as access your procedural memory. You’ll also need to engage your active working memory, which is the ability to hold something in your mind as you’re actively solving a problem.

The higher the level of math you learn, the more you’ll need to rely on your memory for what you’ve learned previously. You can dive into math at any level, but if you want to get the most out of what you’re learning, you should start with the basics and move up.

It’s wise to do this even when you think you know the basics. If you aren’t taking classes from your local community college, you can get some math tutor DVDs to learn from home. Buying books is great, but you’re more likely to retain what you learn by watching someone explain math problems in person.

Math is said to be the language of the universe, and it’s not hard to see how this is the case. Patterns like the Fibonacci sequence and Phi can be perceived in everything from artichokes and pinecones to Romanesque and roses.

When you know that the Fibonacci sequence is 1, 1, 2, 3, 5, 8, 13, etc., you can begin to predict the patterns that will be revealed as flowers and plants grow. Similarly, you can understand that trees express the golden ratio, also known as Phi (1.618) to unfold and position their branches, twigs, and leaves in such a way that they’re able to maximize the amount of sun they can absorb.

In this way, your math knowledge makes it easier for you to understand and appreciate the natural world.

3. Math can literally save lives

The perfection of math is visible within living structures in the world, but we can also use its accuracy and inherent wisdom to improve our own lives. For example, algebra can explain how fast water may become contaminated, and thus, how many people might become ill from drinking it annually.

Such a calculation can be critical for people who work to maintain sources of clean drinking water in Third World nations. If they were not able to calculate the rate at which people could become ill from drinking contaminated water, the magnitude and implications of the threat wouldn’t be so apparent, and it would be more challenging to plan and budget for the fight against it.

Using math to calculate probabilities such as this one is a valuable tactic in our effort to engineer solutions.

Math is also used in 3D CAD programs to calculate the most efficient way to refine tools and techniques. One of the most vivid examples of this occurred in 2010, when the software program SOLIDWORKS was used to redesign the drill bit that rescued 33 trapped Chilean miners, and reduced the expected time the rescue would take by almost three months.

The next time you hear someone asking how math will ever be useful in the real world because they’re frustrated or stuck, you can tell them some of the wonderful reasons to keep pressing forward with their studies.