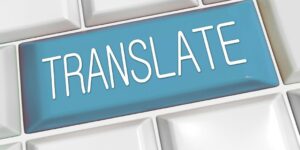 Supply chain and logistics have never been hotter topics in general media and public forums. Industry insiders know the scale of the challenge confronting global business in the coronavirus crisis. The pandemic has shut down or crippled worldwide manufacturing, distribution, wholesale and retail businesses. Those still standing are seeking what they can just to keep the product moving and whole economies alive.

The Need for Translation Services in Supply Chain and Logistics

Given the global scale of this crisis, an underestimated source of problems are language gaps and communication snafus that in normal times might be manageable. But now, as resources are overstretched and workforces are understaffed, there is far less margin for error and far greater risks that logistical information will be lost in translation. In this fraught situation, translation services are stepping into the breach to help overcome linguistic barriers and impediments to uninterrupted commerce.

Being able to speak the language of each human agent in the supply chain is key. But equally important are digital communications that are understood locally – that is, by the localization of web sites, apps and social media in both linguistic directions. Given the centrality of products and components from China in various production and distribution chains, the lockdown of Chinese industry for two months emphasized the importance of being able to communicate from foreign languages to Mandarin, and from Mandarin to foreign languages to communicate accurately and clearly the fast-changing situation.

A Top-Down Approach to Translation and Localization Services is Key

We all know the game of “telephone” – where communications of a simple sentence whisper one person to the next around a circle invariably leads in the end to an expression that bears scant resemblance to the original phrasing and meaning. The same thing can happen logistically rather than linguistically along a supply chain. Minor differences along the way can get magnified enroute. When even minor misunderstandings lead to missed connections, wrong addresses or mistaken deliveries, the cost of errors can have large implications in time and money.

A general principle for mitigating such risks is to keep a top down approach in communications, across languages. The internet, ultimately, is structured in a way to permit at the same time a top-down hierarchy while at the same time allowing access to any point in that structure from authorized individuals at any place in the chain. In other words, in principle, instructions emanating from the top of the control mechanism can be trusted below as a reliable “single source of truth”.

What does this principle mean in practice for those in the supply chain? It means that each link in the chain has secure access to the correct information, which is not communicated in a serial way but instead descends in a single hop from the top. An analogy would be the difference between a direct flight and a multi-hop series of smaller flights, each of which involves aircraft readiness, baggage handling, air traffic control, etc. That complexity essentially multiplies points of failure exponentially. When communication goes point to point, there are a fraction of possible points of failure.

What does all this have to do with translation and localization for supply chains?

If communications are expressed clearly and accurately in a single source, then each link in the chain has direct access to the same message. That works if everyone speaks the same language. But in a multi-lingual, multi-location chain with a complex mix of warehouses, transport and manufacturing and distribution points, human beings at various points along the way are prone to language-based mistakes.

One solution is to standardize on English in the Western world, and Mandarin within China. Between these two languages, according to 2019 figures, you cover some 2.4 billion and a proportionate share of the human beings working in logistics and various other roles in the supply chain. But this still represents less than a third of humanity, and a comparable fraction of the worldwide workforces in warehouses, shipping, transport, and other resources involved in a supply chain.

Let’s leave aside all the misunderstandings that arise between the King Kong and Godzilla of languages. The literature is littered with stories of linguistic misunderstandings between Chinese and English speakers, in logistical processes let alone in many other fields. It has wreaked havoc on supply chains.

Naturally, these problems are dramatically exacerbated in the current crisis. Not just because of the blame game between China and (especially) the English-speaking countries but because of workforce decimation and logistical interruptions caused by lockdowns, closures, and staff cuts. Everyone is understaffed and overwhelmed, short on time and shorter on patience. There are mad scrambles to find alternatives to the way things supply chains were and may never be again.

Where do translation and localization companies come in?

Most translation and localization companies are, pardon the expression, largely immune to the disruptions that have ravaged other real-word heavy industries like manufacturing, distribution, warehousing, shipping and transport. These service agencies are largely virtual operations, linking together networks of language and technological teams that are connected only by the internet.

The larger agencies may support more than a hundred languages, with thousands of native speaking translators and interpreters around the world but on-call, often on a 24/7 Just in Time on demand basis. Not only that: the way these agencies work is that they provide a single point of contact to the client for all languages and all projects. They include in their multilingual services updating all documents and digital assets so that they say the same exact thing in every language and in every media.

The remote and decentralized approach of such agencies creates a one-stop-shop that provides an integrated top-down umbrella of coverage across all languages and media. This ensures consistency both in public messaging but also, if this is the client’s instruction, in all forms and documents, protocols and processes that comprise a modern logistical operation. This unified approach can give supply chain managers the confidence that what is communicated in English from San Francisco is transmitted correctly in Stuttgart and received as intended in Shenzhen.

With all the problems facing those who are struggling to move supply chains, working with translation and localization agencies removes a key source of things going wrong. Instead of playing “telephone” games and having orders lost in translation, a well-ordered linguistics can keep logistics well on track, on the road to recovery.

What are the Essential Tools for Social Media Marketing?