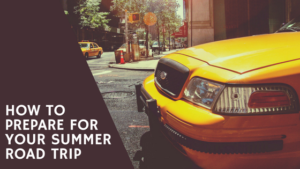 Nearly 75 percent of Americans plan to take a road trip this year, according to the 2017 Road Trip Survey conducted by the GM BuyPower Card, but for millions of motorists, there will be bumps along the way. Four million people get locked out of their vehicle each year. Moreover, there are 220 million flat tires in the U.S. each year but only 40 percent of drivers can change a tire. Here are ways to prepare for your summer road trip so you can avoid surprises on the road.

1. Plan for mobile coverage, if you need it

Nearly one in five (19.7 percent) Americans plan to go on a cross-country trip this year, according to the same survey by the GM BuyPower Card. But in remote areas, your device may not get a signal from a distant cell tower. And it’s during these times that you and your passengers could be most vulnerable if an emergency occurs.

For example, more than half a million drivers ran out of gasoline in 2015, according to AAA, and fuel is definitely not something you want to run out of when you’re in the middle of nowhere. If you need mobile or internet connectivity for most of the journey, plan your routes accordingly. You may want to chart your course along well-traveled highways as well as urban centers. Also, visit your phone provider’s website to see their mobile coverage map.

2. Create a budget for your trip

Financial planning is key even when you’re behind a steering wheel. More than 40 percent of Americans spent over $500 on their last road trip, and nearly half (49.3%) of respondents said they consider hotels their biggest expense, according to the same survey. Fortunately, there are apps such as Airbnb and Hotel Tonight that offer lodging deals to travelers.

Secondly, list your projected expenses and create a budget for your trip. If you use your credit card on your road trip, you might want to think about using a card that comes with travel-related rewards. For instance, earnings from the GM BuyPower Card can go towards the purchase or lease of a new GM vehicle where you get 5 percent on the first $5,000 in purchases every year and 2 percent unlimited earnings on purchases after that.

Motorists often forget to bring important items, especially when they leave town in a rush of excitement. But when you go on a long drive, you’ll have to prep appropriately because you simply can’t drive back home to grab forgotten items. These can include spare keys, sunglasses, bottled water, healthy snacks, driver’s license, AAA membership card, toiletries and similar items. Other must-haves include your phone charger, extra batteries, pillows and blankets.

Also, bring extra cash in case you lose your wallet.

Organize the music on your devices ahead of time. If you go on a cross-country drive, you may underestimate how much listening material you actually need on your smartphone. Silence for hours and hours can make most people go nuts. So make sure to download plenty of songs, albums, podcasts, and interviews to have enough audio for a long trip. And if you anticipate getting consistent mobile coverage, consider using streaming apps such as Spotify or Stitcher which allow you to customize your playlist and listen on the go.

People love to hit the freeways during the summer but preparation is key to ensure a safe and smooth trip. AAA estimates that during the summer of 2017, it will have to rescue seven million Americans from various breakdowns such as dead batteries, flat tires and getting locked out. And 40 percent of the population are unprepared for road emergencies. So plan ahead and stay alert.