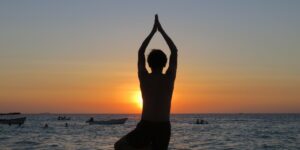 Addiction is as widespread as it is destructive. According to official statistics,The Center for Disease Control, nearly 17,000 people died of addiction in 2009. That’s more than a 100 deaths every day. The high rate of mortality could be attributed to the low rate of treatment. A study found that of the 24 million people who claimed to be addicted to some substance in 2013, only 10% checked into a rehabilitation clinic to get treatment.

Addiction treatment centers are trying new and innovative ways to help those who seek support. Many have adopted Yoga as part of the traditional 12-step program to cure addiction. Ancient yogic exercises and practices have helped augment the harm-reduction program. Specialists say yoga helps lower the rate of relapse and makes people more receptive to the treatment they’re receiving. Here’s how yoga can help:

Starting with the mind

Mindful meditation is the most common form of yogic therapy adopted at addiction treatment centers. The breathing and meditation techniques help infuse a sense of calm and focus. It’s an incredibly powerful way to cut stress and readjust moods.

The purpose of teaching addicts meditation is to strengthen their will and help them deal with the traumatic experience of treatment and recovery. A renewed focus and centered approach is known to help people avoid the triggers that usually set off relapses.

Sat Bir Khalsa, director of the Kundalini Research Institute and an assistant professor at Harvard Medical School, believes yogic meditation can help people replace their need for escapism with a sense of empowerment.

Reconnecting with the body

Treatment can be further augmented by including simple yoga postures. Making these postures part of the daily routine is an effective way of reconnecting with the body and creating a positive relationship with physical sensations.

Addicts often lose a sense of their physical state and are unable to understand how their body is responding to various stimuli. Unlike other forms of exercise, yoga can help people regain this sense of physicality without being overwhelming. Yoga acts as a mild reintroduction to the physical form.

Yoga’s impact on brain chemistry was established by a small study conducted in 2007. The study was published in the Journal of Alternative and Complementary Medicine, funded in part by a grant from the National Institute on Drug Abuse.

Yoga was also considered effective in dealing with the after-effects of treatment. Regular practice helped people regain a sense of control over their lives, reduce the pain and chronic fatigue that is common after treatment, and drastically cut the rate of relapse.

Empirical evidence and scientific studies are quickly making yoga more than a fitness fad. Meditation and simple poses can help recovering addicts deal with their treatment better and improve their lives in a holistic manner.

The best tech for enhancing your online gaming experience

Still Think Augmented Reality Has Nothing to Do with your Marketing Strategy?