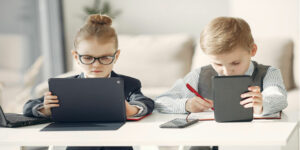 For better or worse, tech is playing a major role in shaping how the youngest generation is being brought up — children as young as eight are now spending 6 hours a day on average in front of screens. Instead of trying in vain to take their screens away from them, it’s time that the lens is shifted instead to focus on how tech can improve a child’s upbringing.

This generation is the most tech-savvy in human history, but that doesn’t mean they’re always using their powers for good. Idle hands will find just about anything there is to do on the internet, but if kids are given apps and platforms that engage them while also allowing them to grow, the results can be phenomenal.

Whether you’re a developer looking to create some kid-focused software or a parent looking to know what your child should be doing on their device, it can be difficult to sort out what works best. Some good places to start include:

In the last 5 years, the average age at which kids get their phone has dropped from 14 to 11, with near three quarters of children owning a smartphone by the time their 12th birthday comes around. Like it or not, phones are more difficult than ever to keep out of kids’ hands.

With younger phone users comes new problems: adolescents are particularly at risk for device addiction, a common problem with serious consequences — kid-focused phone network Gabb Wireless reports that tech addictions can seriously hinder a young person’s ability to develop relationships with their friends and family. If the next generation is going to develop a healthy relationship with technology, they need phones that help them do so.

Transitional phones for kids often exclude common smartphone features such as internet access or unregulated app stores, ensuring that users only have access to the tools necessary for safe and secure communication.

When data is published showing that the youngest generation cares more about environmental causes than any other issue, people should hardly be surprised. As concerns about global warming grow, children are likely to feel more pressure than anyone else to take action — it’s no wonder green search engine Ecosia calls young people “Generation Climate.”

Introducing kids to technology through an environmental context can help them gain an understanding and appreciation for the subject they might not have otherwise, and there are plenty of options for doing so, such as starter solar panel kits or miniature biodiversity projects. Teaching children that technology can be used to make their planet a better place is a surefire way to help them appreciate it in a positive manner.

It’s not even worth citing a statistic: kids today play lots of video games, end of story. While some parents may be driving themselves crazy trying to think of ways to get their children to spend less time playing games, it might make more sense to ensure that the games they are playing are benefiting them.

In fact, 70% of teachers report an increase in student engagement when they’re using educational gaming platforms, but that doesn’t mean that all education should be immediately gamified. As educational gaming giant LeapFrog notes, games should be an occasional supplement to a traditional schedule of learning and play — not the core of one.

Instead of forcing certain video games on children, parents should learn what they like to play and find options that suit their preferred genres — balance between traditional games and educational games can help blur the line between the two categories.

In a time when many people are ready to give up video calls once and for all, it’s important to recognize that the technology can have a positive impact on the lives of many. As COVID-19 continues to guarantee uncertainty for the coming months, having a stable platform on which kids can communicate with friends and loved ones is key.

Communication over video can be more than just saying hello — it can help facilitate some key activities children may otherwise be missing out on. Kid-focused video platform Caribu notes video conferencing can allow isolated grandparents to read books with their grandchildren again, allowing for meaningful connection as well as key exposure to reading. For socialization, video chat can allow kids to be a little closer to their friends as they engage in distanced interactions like gaming.

Introducing children to technology is always a balancing act: just a bit too much or a bit too little and it feels like you’re about to fall off. While there’s no single right way to bring tech into a kid’s life, doing so carefully and thoughtfully can set them up for success well into the future without holding them back now.

These 4 Business Strategies Should Be Your Main Focus Right Now