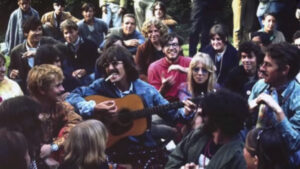 The year was 1967, the ‘Summer of Love’, and a rare amber tinted moon hung low in the sky at the end of the longest day of the year.

The event was rare and auspicious as the full moon called ‘Strawberry Moon’ – a reference to the strawberry harvest season in the West – coincided with the summer solstice. A once-in-a-lifetime event.

That year, the hippie movement in the United States and Europe was at its peak. The underground counterculture had been brewing for several years. But this was the year the media took full cognisance of the great movement.

On 21 June, the summer solstice this year, if you look up at the sky, you’ll see the same amber moon – for the first time in five decades.

What Was the Summer of Love?

The year marked the height of the hippie movement in the United States which was focussed largely in San Francisco. Nearly 75,000 American youth flocked to the streets of the Haight-Ashbury district in San Francisco.

‘If you’re going to San Francisco, be sure to wear some flowers in your hair… ’ crooned Scott McKenzie in the hit song San Francisco, which became an anthem of sorts of the movement.

The movement “divided American culture into a Before and After unparalleled since World War II” says Vanity Fair.

The hippie culture encouraged finding oneself through foreign travels, communal living and an array of hallucinogenic drugs. Jefferson Airplane blared in the streets as LSD was handed out for a surreal hypnotic experience of self-discovery.

Led by the Beat generation of poets and writers like Jack Kerouac and Allen Ginsberg, a community of Bohemians and beatniks had been blossoming in the ‘50s and ‘60s. Inspired by poetry and art, these professors of love and self-expression spoke to the heart of young dissatisfied Americans.

The Human Be-In Rally in January that year perhaps sparked the movement as Beat generation speakers and poets gathered to speak at the Golden Gate Park, according to The Guardian.

That year saw the release of The Beatles’ Sgt. Pepper’s Lonely Hearts Club Band, Pink Floyd’s Piper at the Gates of Dawn, Hendrix’s Are You Experienced? and The Doors – who were later called the “Kings of Acid Rock” by Life magazine – also released their eponymous debut album among others.

What Happened to the Movement?

It is said the local councils of Haight-Ashbury district coined the term ‘Summer of Love’ to turn the media narrative of “druggy, hippie gatherings” on its head.

The utopian movement however became untenable as nearly 1,00,000 people flocked to San Francisco in pursuit of themselves. Practical realities of life caught up, the glamour of ‘dropping out’ didn’t seem to hold as much promise any longer. The Haight-Ashbury district became overcrowded and crime was on the rise.

The movement became a messy media spectacle and lost sight of how it started out, as it traipsed with the influx of new followers.

In October, the hippies in Haight-Ashbury held a ceremonial funeral called the ‘The Death of the Hippie’.

The movement had ended in effect, but left a legacy that the world continues to embrace through music, poetry, art and more.

So on this summer solstice, play some Jefferson Airplane, put some flowers in your hair, (maybe skip the LSD if you wish), but be sure to look up at the sky and admire the amber tinted full moon.

Who knows when we might chance upon a ‘Summer of Love’ again.

Rolls Royce’s Vision for the Future: The 103EX

Mobile Gaming has Come a Long Way since Snake