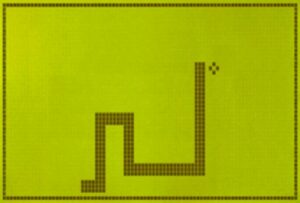 If you are under 19, know that you are younger than mobile games! The first successful mobile game, Nokia’s Snake, was released together with the Finnish manufacturer’s iconic 6110 in 1997. It was an unexpected success, showing people for the first time that their phones can be used for more than just calling and texting. A new industry was born and started its march toward world domination.

The year of our lord Steve Jobs

The next evolutionary step in the mobile gaming world came in 2007, a decade after Snake ignited the fuse of mobile gaming. The iPhone, with its huge screen (at that time) and powerful hardware, opened up a new frontier for game developers. Today, we have over 500,000 games to choose from… on the iPhone only. And this covers native apps only, not games you can play in a mobile browser.

Another branch, another industry

Mobile gaming has forked sometime around the mid-2000s, when phones were much dumber, and screens were much smaller. In 2004, an ingenious developer launched the first Java-powered real money gaming app. It was not a resounding success, since mobile broadband (needed to play the game) was scarce and expensive, but it started something new. And the path from there to the All Slots Mobile Casino, at http://www.allslotscasino.com/au/, we know and love today was straight – albeit not without barriers to cross.

The adventurous quest for the mobile casino game

Since gambling apps were banned both in the App Store and the Play Store, casino game developers had to find another way to deliver their titles to the players. Flash was not the perfect choice, since Apple made it clear that it didn’t want any of that. Luckily, HTML5 came along, allowing the All Slots Casino to provide its players with quality games, no matter what smartphone they used.

Today the All Slots Casino has over 100 games gathered under its virtual roof. Most of the games are pokies (about 80 or so of the total), with new games added each month. While the mobile library at the All Slots Casino is unlikely to reach the size of the desktop one (over 700 titles in one neat package), it is on its way to becoming the most complete mobile casino solution available today.

What the future holds for mobile games

Some mobile games available today are on par with their PC/console counterparts when it comes to complexity and visual appeal. But the simple, annoying casual games of our times are a much bigger success story. When it comes to casual games, mobile has already overtaken the PC/console, and by 2018 the supremacy of the personal screen will be complete. Because everyone will have a small computer in their pockets, with tons of free games available for playing on the go.