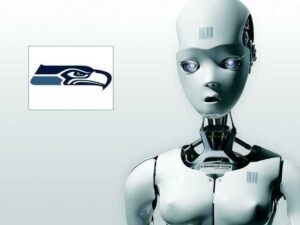 Just in case you were interested in finding out what Cortana thinks of the Thursday night NFL football season opener (and don’t happen to have a Windows phone) she’s picking the Seahawks over the Packers.

Cortana, that uses Microsoft’s Bing prediction technology, got into the Vegas-style handicapping game during the World Cup where she (or it or Bing) correctly picked each of the 15 World Cup knockout round matches with the exception of the third-place match.

Now they (Microsoft/Bing/Cortana) are bringing their prognostication skills to good old American Football. For the 2014-15 NFL season opener Cortana gives the Seattle Seahawks a 74.2 percent chance of beating the Green Bay Packers.

According to Microsoft she’s not just picking the Seahawks because the company is based in the state of Washington. There are a lot of things she takes into account.

For pro football, we model the respective strengths of the teams by examining outcomes from previous seasons including wins, losses, and the very rare tie outcome (two games since 2009), factoring in margin of victories, location of contest, playing surface and roof cover (or lack thereof), weather and temperature conditions, scoring by quarters, and multiple offensive and defensive statistics. In addition to this prior model, we identify fans on Web and Social sites and track their sentiment to understand the aggregate wisdom of this expressive crowd. This introduces data which statistics alone cannot capture, providing real-time adjustments which surprisingly can capture injury news and other substantive factors in win probabilities.

If you don’t happen to be a Seahawks or Packers fan here are Cortana’s picks for the rest of the opening games this weekend.

Texans (51%) over the Redskins

Let’s just see how good Cortana is as the season goes forward. I wonder if she’s got a fantasy team?

87% of people have never heard of the Internet of Things