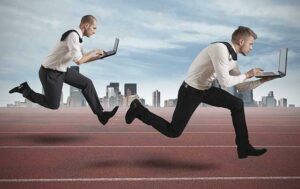 In a speech at tech startup incubator 1776 in Washington D.C. today FCC Chairman Tom Wheeler talked about the need for more competition in the broadband market and for a change he actually sounded like he knew what he was talking about.

“There is an inverse relationship between competition and the kind of broadband performance that consumers are increasingly demanding. This is not tolerable,” Wheeler said. “My goal is not to criticize but to recognize that meaningful competition for high-speed wired broadband is lacking and Americans need more competitive choices for faster and better Internet connections.”

Wheeler backed up his statements with data collected by the FCC that revealed while 75 percent of Americans can choose between two or three Internet service providers (ISPs) to deliver download speeds of 4 megabits per second (typical DSL speeds) if you want speeds of 25 Mbps or more, 55 percent of U.S. households have only one option and almost 20 percent can’t get those kinds of speeds at all.

And even though cable companies point to DSL services as competitors the reality is that DSL delivers far slower speeds than promised and generally lagged far behind cable and fiber.

“Traditional DSL is just not keeping up,” Wheeler added. “Today it seems clear that mobile broadband is just not a full substitute for fixed broadband.”

Wheeler also outlined steps that the FCC might take to fix these problems. First, they want to protect competition, including generally opposing merger efforts in the broadband industry. Second they want to encourage competition, including opening up new spectrum to mobile broadband and by pushing for net neutrality rules that ensure “the Internet remains free from barriers erected by last-mile providers.” Finally they want to work to create new competitors in place where “meaningful” competition is not available. Wheeler said that the FCC will push for more unlicensed wireless spectrum, and it is looking hard at state laws that prohibit or limit city-funded broadband networks.

While all this sounds well and good on the surface we’ll have to wait and see if there are any real teeth in Wheeler’s bite or if this is simply more bark.