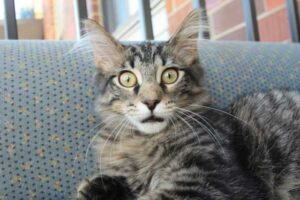 In a world of spying, surveillance leaks and advanced analytics tracking our every move, a new website is tracking the locations of a million cats.

Owen Mundy, a professor at Florida State University has launched a unique site that tracks the location of cats around the world based on metadata embedded in photos that people inadvertently posted to social media sites.

Using images of cats uploaded to photosharing services, including Flickr, Twitpic and Instagram, Mr. Mundy extracted latitude and longitude coordinates contained in the metadata attach to each image. His site displays random images from a sample of one million of what Mr. Mundy estimates are at least 15 million pictures tagged with the word “cat” online.

The images are displayed on a map using satellite imagery, with nearby cat photos also visible. Specific street addresses are not displayed, but it wouldn’t be difficult to pinpoint where the felines reside.

According to professor Mundy’s blog:

“I Know Where Your Cat Lives” iknowwhereyourcatlives.com is a data experiment that visualizes a sample of 1 million public pics of cats on a world map, locating them by the latitude and longitude coordinates embedded in their metadata. The cats were accessed via publicly available APIs provided by popular photo sharing websites. The photos were then run through various clustering algorithms using a supercomputer at Florida State University in order to represent the enormity of the data source.

This project explores two uses of the internet: the sociable and humorous appreciation of domesticated felines, and the status quo of personal data usage by startups and international megacorps who are riding the wave of decreased privacy for all. This website doesn’t visualize all of the cats on the net, only the ones that allow you to track where their owners have been.

As Derek Willis points out in a post on The New York Times website, “The lesson for people who share pictures online, whether it’s kittens or your children, is this: If you include more metadata than you have to with your photos, don’t be surprised if it’s used online in ways you didn’t expect and can’t fully control.”

It’s a frightening world out there when a cat’s privacy can be invaded so easily (presumably without their knowledge or prior consent). Next thing you know some nefarious cyber-criminal will be hacking into our pet’s gmail accounts, stealing their passwords and racking up fraudulent charges at PetCo. So warn your pets to use strong passwords and encrypt all financial transactions or they may discover that someone has purchased 9,000 lbs. of catnip and 84 cases of Beggin’ Strips using their stolen debit card numbers.

I wrote this story because I thought it was funny and cute and revealed just how obsessed people are with sharing photos and videos of their cats online. And then I started thinking about it a bit more and Derek Willis’ comments began to sink in.

What happens when someone takes a picture of their vintage, fully-restored classic car and posts it online? If the metadata is embedded in that photo, then they have basically told every car thief in the country with even a tiny bit of technical savvy exactly where that car is, making it much easier to find it and steal it.

Or when someone posts a picture of a gun collector holding up his prized, antique dueling pistols it might just be a matter of time before someone breaks into his house and steals his entire gun collection.

And, as Mr. Willis implies, when people post pictures of their children on some social media site (and who doesn’t do that?) then they have just published pinpoint location data for every perv out there.

The more I thought about it (and thought about the pictures that I’ve posted) the scarier it got. While we may think that all we are doing is sharing innocent of bits of our lives with friends we could actually be opening ourselves up to old fashioned break-ins, thefts and possibly worse consequences.

There are some relatively easy ways to remove metadata (EXIF and GPS files) from photos. There are free utilities that you can download, Windows Explorer can remove some data (but may have trouble removing GPS coordinates) or the simplest solution is to change the settings in your camera or smartphone (but even that won’t necessarily remove everything).

Social media sites like Facebook say that they strip the metadata from all posted photos but obviously, as the I Know Where Your Cat Is experiment shows, not all services do this.

It’s certainly something to keep in mind, whether it’s a pic of your kitty or a valued possession or even a child.