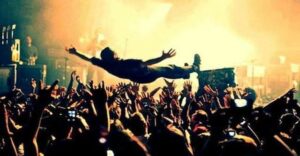 Snapchat users will be treated to a new feature called Our Story at the Electric Daisy Carnival music festival in Las Vegas next weekend. Concert goers will be able to contribute their photos and videos to one big mashup of the event.

The new feature will let users, who have their location services turned on, share their concert photos and videos with “Our EDC Story,” which will appear under the “Send To” section of the app during the event. Snapchat will then create one big story from all the content and send it to those who have friended the EDCLive account.

It’s an interesting concept, and leapfrogs Snapchat’s My Story (where users can compile all their pics and vids into one long-version account of their day). The difference is that now the story can be told by dozens of people who may not even know each other.

A lot is going to depend on how well all those disparate pictures and videos can be woven together into a compelling story. It might be easy-peazy or it could just be a jumbled mess (I’m leaning toward it being a pretty interesting way to get a unique, if somewhat frenetic view of what actually being there would be like – think Woodstock-like montage).

I also imagine that concert promoters are going to be watching closely. They will either decide that the experience will encourage people to go to concerts just so they can add their bits to other Our Stories or they will decide that the results are satisfying enough so that people decide they don’t have to actually show up in order to enjoy the events.

They might also decide that the resulting mashups are good promotional material that make concert going seem more exciting (I don’t think there are going to be a lot of videos of people trying to find parking spaces, standing in long lines to get in or queuing up for the bathrooms).

So it could be a whole new way for lots of people to share a common experience or it could be just another gimmick in the ongoing battle between messaging services.