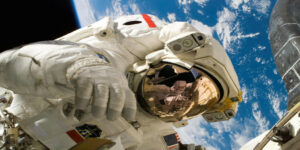 In the 21st century, parcels arrive at your front door from all over the world for next to nothing. Make the 62-mile journey towards outer space, however, and things get a lot more expensive.

The transportation of cargo on Space X’s Dragon spacecraft to the International Space Station (ISS), for example, costs around $9,100 per pound. In simple terms, that means each delivered lemon costs around $2,000.

That creates a huge problem when it comes to water. While we might be able to pick up a bottle at the local corner store for less than a dollar, the cost in space would sprial to $10,000 due to its weight.

It won’t surprise you to learn then that NASA decided relatively early on that sending water to space regularly wasn’t an option. Instead, they came up with a solution where astronauts would have to recycle the water in their body by capturing condensation, sweat, and yes, you guessed it, pee.

The station’s complex water system does some of the work for them. Installed in 2003, it’s made up of multiple filters and a distillation section. Any moisture in the air is automatically captured and stored in the station’s tanks, along with the water runoff from the toilet and shower.

This was added to in 2009 when NASA installed its rather distinctly named Urine Processor Assembly. This now allows those onboard the station to reclaim around 90% of water from their own urine and from the urine of research animals onboard. Eventually, the urine becomes mixed with the other collected liquids, helping to keep both humans and animals onboard hydrated.

NASA mixes the recycled water with iodine to help make it safe for human consumption. Its taste has been likened to that of bottled water by Layne Cater, the manager of the ISS water system.

While the majority of astronauts are happy to drink their own urine, those from Russia are not. They have their own separate water supply that’s purely shower runoff water and captured condensation. American astronauts have even collect the Russian supplies of urine to use for their own water supplies.

Russia also uses silver instead of iodine to help disinfect its water supply. Both processes help to make the water on the station safe for drinking, food preparation, and oxygen creation through electrolysis.

The station stores around 530 gallons of water in reserve at all times should something go wrong with either system.

You might think that one of the main wastages of water onboard the ISS would come from its plumbing system. Due to the lack of gravity in space, however, things work a little different to your conventional toilet on earth.

Astronauts have to manually pump their waste through a piped system. The force of the air helps to keep any waste moving in the right direction. This also means that there’s no need for water, freeing up the commodity to be used for more important uses – such as staying alive.

Finally, if you’re wondering where the other type of human waste ends up, get this: at different intervals during the year, astronauts’ collective poo is released into space. It then makes its way into the Earth’s atmosphere and burns up, looking just like a shooting star.

Who knew poo could be so magical?

These Modern Home Gadgets Are Bringing Our Homes Into the Future