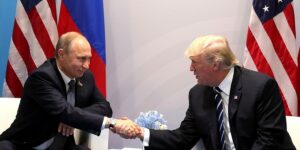 It was concluded with high confidence by the United States Intelligence Community that the Russian government had participated in electoral interference in the US presidential elections in 2016. According to an assessment by the Office of the Director of National Intelligence (ODNI) in January 2017, the Russian leadership wished for Donald Trump to emerge victorious in the elections rather than Hilary Clinton. It was also stated that an ‘influence campaign’ was personally ordered by Russian president Vladimir Putin for harming the electoral chances of the Democrat candidate, Hilary Clinton and also for undermining the faith of the public in the US democratic process.

On October 7, 2016, it was jointly stated by the Department of Homeland Security (DHS) and the ODNI that the US Intelligence Community believed the Russian government to be behind interference in the election. They said that the hacking of emails had been conducted with the specific purpose of interfering with the US election process. According to the report published on January 6, 2017 by the ODNI, the servers of the Democratic National Committee (DNC) had been hacked by the Russian military intelligence service (GRU). They had gained access to the personal Google email account of Joh Podesta, who was the campaign chairman for Hilary Clinton.

John Podesta had received a phishing email that was sent in the form of a Google alert informing him that someone else had tried accessing his user account. The email included a link to a page where Podesta could change his password. He consulted a staffer who was part of the campaign’s help desk and shared the email. The staffer accidentally typed that it was a legitimate mail instead of illegitimate (it was a typo). Podesta followed the instructions provided to him and changed his passwords, which gave the Russian hackers complete access to his account. The contents of his account were forwarded by the hackers to WikiLeaks.

There is very strong forensic evidence that links the DNC breach to known operations in Russia. However, Russian officials have constantly denied their involvement in any leaks or hacks pertaining to the DNC. It was testified by James Clapper, the Director of National Intelligence, in January 2017 that Russia had disseminated fake news for interfering in the elections and social media had been used for promoting it and making it viral. Had social networks like SecureTribe been used, Russian hackers couldn’t have gained access to any sensitive data and caused leaks due to the strong encryption used.

The ‘red phone’ was used by then president Barack Obama on October 31st, 2016 to warn Putin to stop his interference in the US elections or be ready to face the consequences. Obama issued an order in December, 2016 for publishing a report on hacking efforts directed towards the US elections since 2008. Meanwhile, a bipartisan investigation was called by the US Senators. Initially, the president-elect, Donald Trump had denied all claims concerning foreign interference and said that Democrats were only using it as a way of reacting to their loss in the elections.

35 Russian diplomats were expelled by the Obama Administration on December 29, 2016. Access to two Russia-owned compounds was also denied and existing sanctions on Russian individuals and entities were also broadened.

Since then, there have been a number of investigations conducted into the Russian influence in the US elections. The FBI launched a counter-intelligence investigation. Hearings were conducted by the House Intelligence Committee and Senate Intelligence Committee. There have also been inquiries about possible financial ties and links between Trump associates and the Kremlin. The people who have been notably targeted in these investigations are Roger Stone, Carter Page and Paul Manafort. FBI Director James Comey was dismissed by President Donald Trump on May 9th, 2017 and he said that it was partly because of his dissatisfaction with the constant suspicion about the presidency due to Russian interference.

Robert Mueller, the former director for the FBI, was appointed as Special Counsel for overseeing the investigation on May 17th by the Deputy Attorney General Rod Rosenstein. He is also the Acting Attorney General for this investigation. It is believed that Putin interfered in the US elections as a vendetta against Hilary Clinton and also for fomenting global distrust of the United States.

Why Don’t Astronauts Run Out of Drinking Water?